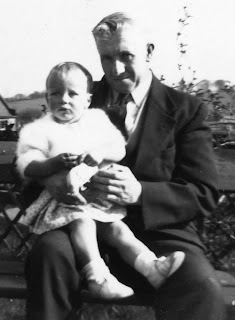 As soft as powdered snow
His white hair lay under his post man’s hat
In days before push trolleys eased their load
And high vis jackets proclaimed their presence
on dark winter mornings he walked the unlit streets
in silent solitude before dawn.

His life was spent in two uniforms
Of Institutions that defined him,
That shaped his life.
The first Initially worn with pride;
The second finally worn to shield.

The first took away any semblance of the young farm lad
Who, in courage or foolhardiness, signed up to fight at fifteen
Then bravely ran to face the enemy at Ypres
His Black Watch turned to black shadow
Constantly shrieking
Hauntingly shrinking his capacity to cope
He ran from a world no longer understood
To the safety of home and family
Who never asked
Who always accepted
Their changed brother.

I never knew the innocent youth left lost somewhere in the muds of France
I only knew the older, odder, man next door, my uncle John
Who never married; who never had children.
But as we played
his potting shed my second home,
his garden pots my mud pie castle makers
I saw my joy reflected in his eyes
and on his face a momentary smile of carefree happiness.

Only later did I understand the cause of his quietness,
His shell shocked search for stillness and seclusion
And how it must have been so very hard for him each year
at the noisy crowded Post Office Christmas party
as we walked hand in hand to see Santa Claus.
As a child I simply saw his love
the fun we had unwrapping presents
I did not see the chaos clanking in his mind
his rising anxiety amidst those festive hordes
and the struggles he endured to balance his daemons for my sake
Each Season of Peace and Love.

Shaking with shyness
she strolls silently along The Strand.
Her hands hold hats
folded from felt for daylong hours
into the night when
mercurial madness moves memories
from her maiden mind
as an earie erethism (*) enters in.

(*)   https://en.wikipedia.org/wiki/Erethism -Erethism is a neurological disorder affecting the whole central nervous system derived from mercury poisoning. Known as the mad hatter disease, it was common among old England felt-hatmakers who used mercury to stabilize the wool in a process called felting. This occupational exposure to mercury vapours gave rise to the expression “mad as a hatter”. Its effects include characteristic behavioural changes such as irritability, low self-confidence, depression, apathy, shyness and timidity, and with prolonged exposure to mercury vapours, delirium, personality changes and memory loss occur. People with erethism find it difficult to interact socially with others, with behaviours similar to that of a social phobia and they experience physical problems such as a decrease in physical strength, headaches, general pain, tremors and irregular heartbeat.