Rasgar-ing the literal : The Polish Boxer by Eduardo Halfon 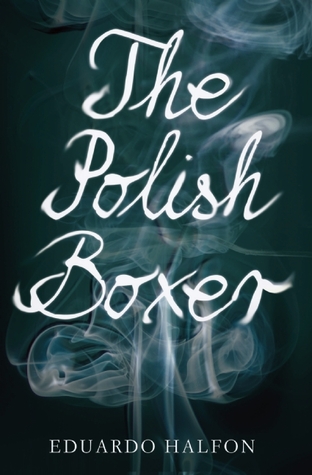 There is a great review of this book on the Word Without Borders website,  an interview with the author is available on YouTube and on another interview here.

I can’t actually recall ever having read as international a book, a book with so many cross cultural and cross disciplinary references within its words and storyline – from Guatemala to the USA to Serbia, from Thelonius Monk to mariachi and gypsy music, from Spanish to Serbian, from Mark Twain to Henry Miller. The book is a series of linked stories, which were translated by 5 translators yet when reading it I could not tell!

The book begins fairly realistically, telling of a teacher’s struggles to get his class interested in reading literature  - Edgar Allan Poe, Maupassant, Chekov, Hemingway, Flannery O’Connor – and then about his encounters at a highly academic conference on Mark Twain where his comparisons with Cervantes fall on a silent ears except for the aging Twain professor, Joe Krupp. I liked this character with his old man's jokes and witticisms – “what's the difference between a cat and a lie? a cat only has nine lives."

But then comes the major change in the writing, there is a pivot point at the chapter entitled Epistrophy (*), after the Monk composition , in which the narrator meets Rakic a wandering pianist. Rakic sends him a series of postcards from his travels and finally the narrator tries to trace him and his roots down in the smoky, seedy depths of post communist Belgrade. Throughout the novel there are repeated references to the narrator’s Jewish grandfather and his survival from Auschwitz thanks to the wise words of the Polish boxer of the book’s title. There becomes a real mix of real and pseudo real impressions, interpretations and illusions leaving the reader questioning the reliability of the narrator, how much his search for Rakic is in truth a search for his own roots.

The teacher in the first chapter describes the difference between a writer and a great writer as "the ability to be saying one thing when in reality you were expressing another, the ability to use language as a means of accessing a sublime, ephemeral metalanguage. I think this is exactly what Halfon himself achieves. This is a book about identity, about the reality of literature, and the transitory nature of these . He asks himself near the end of the book “how is it possible for literature to rasgar (**) reality, to break or tear it. As though reality were a piece of cloth? As though reality were a car window? As though reality were a sheet of paper?”  How much of Rakicthe half Serbian, half Gypsy, itinerant, almost ethereal, musician actually Halfon, the English speaking, Spanish writing, with mixed Jewish and Arabic ancestry, born in Guatemala but living in the USA, and how much is Haflon the book’s narrator? As the narrator says “A story is nothing but a lie. An illusion. And that illusion only works if we trust in it.” I clearly did and I was enthralled by this book . It  is thought provoking and deeply philosophical. I do hope more of his novels and short stories are translated soon into English. For now 3 more of his short stories can be found on his Words Without Borders webpage.

(* ) Note: Webster’s Dictionary defines epistrophe as repetition of a word or expression at the end of successive phrases, clauses, sentences, or verses especially for rhetorical or poetic effect (as Lincoln's “of the people, by the people, for the people”) .

ashramblings verdict: 4* probably the best first novel I have ever read. (I’m keeping the 5* rating in hope his other books are even more incredibly credible!)

of a time gone by,

when tails and silk dresses danced and chattered.

locking in the ghosts

of animals and men long dead,

Awaiting the arrival of sleep

the toys are boxed away.

Eyelids heavy in their droop and fall

The patter of rain pits the glass

The gust of wind the curtain flaps

the grey tentacles of night

they crawl along the wall

to make him stir

The magician spreads his cape to work his magic

the alchemy of old

made manifest in a sculptor’s hands.

the works of a man

and marvel at the works of men

of times past, present and yet to come

where one and all may come

to recreate the magic of old

a mystic river linking all to one for all time

rising as smiles on the faces of one

as they each rise and fall

from chair to chair

what fun we have one and all 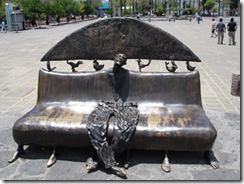 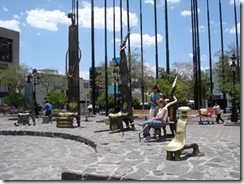 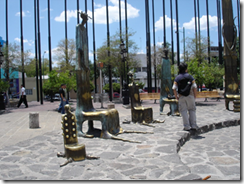 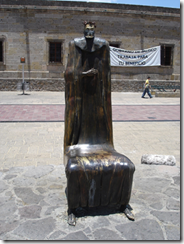 The Immolation of Quetzalcoatl

cultivator of the arts

Condemned to wander the divine water

on his boat of snakes

the priest king of Tula vowed to redress

the degradation of humanity.

On his sacrificial pyre he stood proud

to birth the morning star

to rule the winds and whirlpools

to reunite, each day, the rain and rivers

in the glory of life.

In Guadalajara the bronze ribbon snakes heavenward from the plaza

as smaller serpents writhe amongst the fountain’s rhythmic surges

recalling the cycle of death and resurrection

calling to all of Mexico to not forget

the Immolation of Quetzalcoatl. 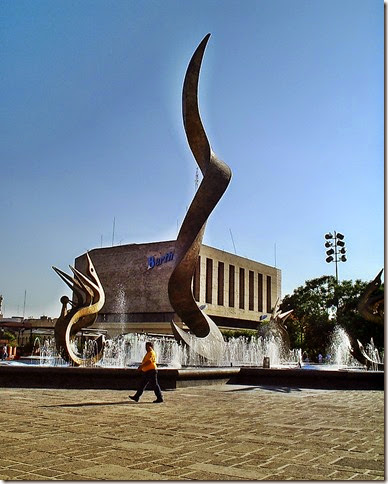 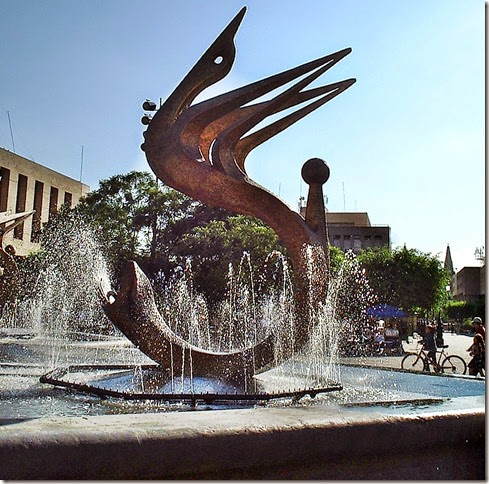