Grant Me Atonement for Mesostics

Jackson Mac Low developed a type of non-intentional composition using index words to select pieces from an already existing text. This he called “diastics” or “reading through” the source. This was further developed and used extensively by the experimental composer John Cage

When Cage began to write mesostics, he adopted Mac Low's acrostic procedures, but with an important difference. Whereas Mac Low lets chance operations generate the entire text, Cage uses these operations to generate the word pool to be used and the rules to be followed, but he then fills in lines with "wing words," generated, as he repeatedly put it, "according to taste." (see http://epc.buffalo.edu/authors/perloff/cage.html)

There are two types of mesostic:

· In a 50% mesostic, the given letter capitalized can occur between it and the following capitalized letter

Luckily, there is a mesostic generator to help in this process http://mesostics.sas.upenn.edu which takes as its input the source text to be “read” and the word or phrase to be used as the “spine” of the resultant mesostic.

The theme of this week’s Writing Class homework was “penance” so I took as my source text the text of the “Song of Penance” http://www.lieder.net/lieder/get_text.html?TextId=6040 , using as my spine phrase “Grant me atonement” and applying the 50% mesostic rule.

Against You alone have I sinned,
and have often done evil before You.
You see the guilt that deserves Your curse;
see also, God, my suffering.

From You I do not hide my prayers and sighs,
and my tears are before You.
Ah, God, my God, how long should I suffer?
How long will You leave me?

May you fill me early with Your grace,
God, Father of Mercy.
Help me for Your name's sake,
You are my God, who gladly helps.

Let me once again happily walk your path
and teach me Your sacred law
so that I can mold myself daily to Your will;
You are my God, I am Your servant.

Lord, hurry to my aid, my Protector,
and lead me on the right path.
He hears my cries, the Lord hears my prayer
and takes my soul in charge. 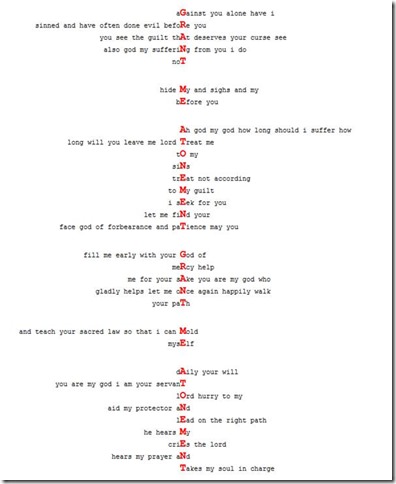 With minimal changes this reads - 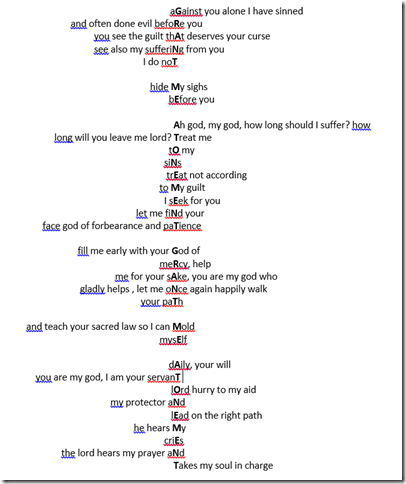 A missing button left undone
My half drunk cup of coffee
now cold. Where is my scarf?

Buster paces round unsettled
“Mum, I still need my dinner money”
Where is my purse? I must be daft

to leave it in the bathroom sink
Now why’s the snake atop the cooker
when its meant to stop the front door draft?

The world according to -

Lets go to Ben Brown in Harare, a momentous morning.

Yeah. When you think about it….

Lucy, tidy those toys up. I won’t tell you again.

- for almost 4 decades….whom she forced out – gotta find a way to constitutionally remove him – - that’s if he doesn’t go voluntarily -

Always under my fuckin’ feet

Jake, what you want with your bacon?

sausage? you got sausage?

Josh, get dressed, out of those PJs now, move

- how much more humiliation he’s prepared to accept –

Where’s your brother, he up yet?

no make that fried eggs, luv.

- what his demands are? What potential fate –

Tim, get up or you won’t get to the game on time

Watch the timer Rosie, when it’s emptied, you shout me, OK?

- trying to find the right words –

Luce, get hold of that pup.

You wanted a dog now learn how to control it

- a key part of negotiations -

else it will have to go

- his own sense of his own dignity -

- he refuses to accept reality ….his world has vanished -

On the ironing pile

- most people do not know another leader. The fact that he’s being turfed out…

- respect for elder, elders should be treated with dignity

Rosie, go get your dad. Breakfast is ready

- it was extraordinary, he dressed up in academic robes - - for him it looked like business as usual

Jake, can you get the door, it’ll be Amazon

Can you lift that in for me.

Tim! Porridge is getting cold!

- at the moment people are just celebrating –

- Ben Brown in Harare, thanks very much

News and truth lie abolished
Is our BBC still honest?
Languishing in luscious lethargy
Mortgages paid but integrity
lost to an afterthought
Today’s commentariat comments not. 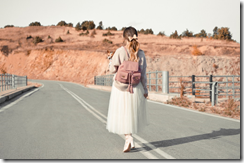 Step on a line, break your
Jump the tracks
The road to nowhere
Less travelled
Is fraught with dangers
Approach with caution
Best foot
Forward into the breech
Enemies at the gate
Closed behind
No way back
The point