Thoughts upon buying a fridge & opening a bank account 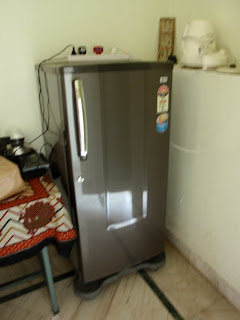 I went with Manoj, one of our project oordinators, to buy a fridge on Thursday evening. It is always useful to have someone  who speaks the lingo along to help understand the process of buying something like this here, you can't just up and walk out with it! How do you get the fridge home, where do you fiind the delivery man, how do you tell the delivery man where your house is when it has no address and both you and the fridge cannot both get into the autorickshaw, and how much should I pay him, never mind making sure I am only paying the correct price for the fridge in the first place.

There wasn't much of a choice, only a few models, all basically the same size 175 cu litres, one door, with ice making compartment . There was more choice of colour than of make or model. At 9700 Rupees, plus 150 Rupees for the stand, plus 100 Rupees for delivery it was quite a bit more than the 7000 VSO allowance for a fridge. The only other model, a smaller one, was 8000 Rupees and no where near as solidly built as the other models. Clearly I was going to have to put money to it so I may as well buy the better one. It has got to last 2 years after all. So I coughed up the extra 3 grand and am now the proud owner of a grey fridge - no I could quite see me with a strawberry pink one, or a turquoise one, too reminiscient of those avocado coloured 1970s bathroom suites everyone had then and now can't wait to rip out of their houses back home.

The next morning in the office I was asked how the shopping trip went. Then someone asked me how much I paid. I know that even my allowance is more than what some of the project managers are getting as a salary, but I also know that it is very acceptable here in India to ask how much someone earns and how much you paid for something, be it a large item or a small one, so I'd decided always to be open about it. It doesn't make it any easier however, when you see the reaction in people's faces when I say I paid nearly 10000 Rupees for the fridge. To them that is two months salary, even the project managers do not have fridges at home. I'm asked why I need one -- what can I say? Food goes of from day to day? Butter turn rancid from  one day to the next? What can I say when it is the same for them, or maybe they just buy every day, or not eat things which go off that quickly. I add that VSO paid me an allowance for buying the fridge. Oh that's alright then, suddenly it becomes accepted that I should have the fridge and pay this sort of money for it. Weird.

I'm sitting a couple of days ago with the same guy, my NGO minder, in the bank trying to open a bank account for me. This was the third bank we'd tired. The first could not open accounts for non Indians, the second, the State Bank of India, could but the manager clearly did not know how to do it, needed to consult with other people, but then never got back to us, never was there when we phoned and then was out of town, so we gave up and tried our third bank, the Indian Overseas Bank. What a difference! Here the manager not only knew that his bank could make an account for a foreigner but knew how to do it, within 10 minutes he had reviewed my documentation and I had the appropriate forms to fill in! Amazingly quick for Indian bureaucracy! We had to return to the NGO office to fill in the form as it needed  my boss to countersign it, but we returned with the form later the same day and again within minutes the process was complete and an inital deposit of 500 Rupees made, receipted, and instructions given one when and how to collect my passbook, when my PIN will arrive, how to then collect my ATM card, and how to register for Internet Banking.  Let's hope those parts of the process go as smoothly!

Anyway the reason for starting to tell you about this wasn't to be amazed at how quickly everything can be done, and what a difference the attitude of the manager made, but to mention that one of the questions he asked me was how much would be paid in each month as my salary. So I explained that there would be 9000 Rupees in total, 7000 from VSO and another 3000 from my NGO. I don't know whether my fixer knew what I was being paid but he certainly does now. I'm aware it is more than they get, but there is no point in being embarrased about it, that's just the way it is.

Everyone asks me how much things cost in the UK. I always say it is very difficult to make direct comparisons but then give an example of food prices. Vegetables costing 20 Rupees per kg here would cost anything from £1.00 to £1.50 per kg, that's 3-5 times as much. On the other hand my fridge, costing equivalent of £140 is probably about the same price, the netbook computer that a colleague bought in Delhi for 16500 Rupees is probably about the same price in the UK. One can readily see how consumer goods are totally out of the price range of ordinary, working and many middle class Indians, never mind those less well off. Think back to what I said about salaries in my earlier post
Posted by ashramblings at Wednesday, February 17, 2010
Email This BlogThis! Share to Twitter Share to Facebook Share to Pinterest
Labels: My life in India