Another rambling about food 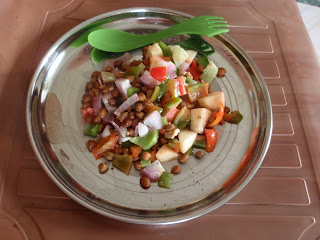 ...for no other reasons than well we haven't had one for a bit...

All over the place one sees advice and information about how to cope with high temperatures - drink more, much more. Don't get dehydrated. If you do take rehydration drinks, or make you own with water, salt and sugar. But I've  seldom seen advice about what to eat in extreme high temperatures.

In the desert one eats after the sun goes down, it is so much cooler then and the whole preparation and consumption of food, followed by the inevitable sweet tea and the round the camp fire conversation is what makes an evening. One's appetite, which disappears during the heat of the day returns in the relatively cool evening. There's nothing to beat soup made with a stock from lamb's bones - my mouth waters at the thought of it.

Here however, although the temperatures go down at night, currently from a 43-47C daytime peak, down to a more manageable 30C nightime low, the humidity levels start to climb from mid afternoon to 70% levels in the night and doesn't really disapate until perhaps 4-5AM. That's a guess as I am still asleep :)  Consequently ones appetite is all over the place. Some days it just gets lost, and you have to make yourself eat something. Other days you feel famished, but mainly it is a carving for non curry, non cooked food. I had a mild craving a couple of weeks ago for boiled ham - clearly a meat you can't get here but also people just don't eat much raw or cooked but served cold food. The last thing I fancy either for lunch or dinner is a hot meal, yet eating is really important because this type of weather just drains the energy out of you in a way nothing else does. You are constantly wet, dripping with sweat, as it doesn't evaporate. You end up taking at least 3 showers each day, and I am thinking this will increase soon to 4! All this sweating, means you are loosing fluid, hence all the advice to drink more. But you are also loosing minerals, salts and using up your energy supplies trying to maintain your body temperature at a steady state. So eating is important and it has to include a energy giving component. Indians have incredible sweet tooths so getting sugar is no problem at all, in fact its avoiding it that takes the effort. Soft drinks here are so high in sugar, even more so than back home. The Indian equivalent to Coke is called "Thumbs up" it has a more gingery taste, reminding me a little of ginger beer, but it is so so much sweeter than Pepsi, Coke or ginger beers. And there is no such things as diet version!

All this means that fruit becomes a important nutritional source of natural sugars, as well as providing a longed for crunch while eating an applee that carrots from hot climate just do not have. Also wet foods, such a cucumber, grapes etc provide another way to get some more fluid into your system. Being a largely vegetarian diet, sources of protein have to be found. Ok I am occassionally eating fish and have once bought chicken. Chicken here requires quite a bit of preparation - at least there is no killing, pluccking and skinning, but it comes chopped up to tiny pieces and I still haven't found enough Oriya to stop this happening. But the update is that time spent  washing and cleaning the meat can also result in sorting out the boney bits from the boneless bits, and then those boney bits can be boiled to make gorgeous chicken stock and mouthhwateringly good chicken noodle soup. Great in the winter months. But for now its Spring, so back to how to eat in high temeperatures.

I should add a disclaimer at this point that all this is just my observations, I'm not a nutritionist, just a foodie who like to eat well.

Having spent the last couple of weekends in Koraput I've been spoilt. Even thought it is a smaller place, with about half the population of Rayagada, Koraput has the advantage that there are currently 5 VSO volunteers there, and there have been a steady stream of them over the past year. So the shop keepers have recognised a good business opportunity. Also Hilary told me that there are often other westerners there, she thought some Australians via some religious association. Whatever, there is clearly a market for certain different types of food. In addition, the weekly tribal market sees local people arriving froom all the surrounding villages to sell their fresh produce. It puts Rayagada's market to shame, but the upside for Rayagada is there is good fish and prawns to be had. Although relatively expensive, on a volunteers allowance you coulldn't eat these every day, they are feasible and good enought to partake of every so often. Fish is 100 Rupees per kilo and chinguri/ large prawns are 250 Rupees per kilo and 5 Rupees that you pay a woman to de-scale and de-leg the prawns, which is 5 Rupees well spent.

Anyways back to the food delights available in Koraput - I came away with Olive Oil, green peppers, walnuts and courtesy of Hilary spotting the last cartons in "the best shop in Koraput" 2L of apple juice with no added sugar!

All this has made my cravings for cold food take on new proportions this week. So my favorite so far has been chick pea salad, which has more than a passing resemblance to Jamie Oliver's recipe

It should be obvious what to do, mix the chopped ingredients with the cooled chick peas, add the seasoning and mix throughly. Double up the quantities for two people.