I'm back and have been up country already

Finally I am back in India. I was due to return on 6th August but Air India refused to board me with my Orissan exit and re-entry permit, so I had to apply for a whole new visa at the Indian High Commission in London.
My thanks go out to all my friends who help me through my original and my extended stay by giving me a place to stay for one or many nights, meals to eat, cider and wine to drink, a car to drive, lifts to and from stations, trams, buses, and airports, and even a trip to the theatre. I love you all - Paul &amp; Julie, Klair &amp; Russell &amp; Mac, Nico &amp; Debs, Hilary &amp; Jon, Thecla, Judy &amp; Ian, Vicky &amp; Tim, Helen &amp; Adam, Roger &amp; Mary Ann, Gillian, Keith &amp; Brian, John and everyone else to numerous to mention who gave me emotional support via this blog, facebook, email, by phone and face to face. Special hugs to two new 4 legged arrivals Stan and Rani, and to one 2 legged one, my newest grand niece, Lillia, who I thought I shouldn't see until she was walking ( although judging by her standing strength that wont be that much longer) and last but certainly not least my love and best thoughts to Jane whose strength of character never fails - I am so glad we had some time together.
The flight back went smoothly except there was no entertainment system working :( My route was dep Heathrow 9:45AM Sun 22nd, arr Mumbai 23:30 Sun, dep Mumbai 9:30AM Mon23rd (what a wait!) arr Vizag 12:30 Mon, car to Rayagada arr 18:00 Mon. My pick up at Vizag had car problems so he had organised another driver and car for me, rather than have me wait for the repair job being completed. The monsoon has taken its toll on the Vizag - Rayagada road. The Orissan section of this is bad at the best of times - more holes than tarmac, but I reckon at one point if there is another flood this will wash away even more of the rubbled tarmac and make the potholes so many bad and so big that the road will soon become impassable to cars. Needless to say the huge lorries that ply this road in their 100s will continue to traffic thus making the road surface even worse. The difference in the road between the comparatively rich Andrah Pradesh state part and the poorer Orissa state part is very noticeable - within a few minutes of crossing the state border into AP one  finds a well maintained road, and eventually motorways/highways.
I collected my house key and headed off to have a good nights sleep expecting the house to be really quite stuffy and smelly after being locked up since early July. Unfortunately not only had I to contend with the expected musty tropical rainy season odours, but a rat had got in and it was horrid. I borrowed bleach from my landlady and cleaned the floors, washed the bedlinen &amp; mosquito net, and started on the kitchen utensils and shelves before falling into a well earned sleep.
I also discovered that I had no gas left in my cylinder ( no sign of a gassed rat sadly) so I couldn't cook anything, so muesli bars and tins of fish have been sustaining me since. The gas supplier is out of gas, so it may be another day before I have cooking facilities back on line. Notably also the local petrol station was out of petrol, and I have noticed that the price of fruit and veg has gone up dramatically since I left - bananas which were 25 rupees for 12 are now 40-45 rupees!
Next morning however, I was up at 6:00AM for an early start up country with Mr P, Manoj one of our project leaders, and one of project sponsors who wanted to visit some of the villages which are about to become part of a solar lantern  project. Unfortunately, and in typical Indian fashion, our driver did not show up, Mr P phoned around loads of places before finding another driver who would drive us out to this part of the district. Many will not drive that far out into the countryside. It is at least a 3 hour drive into Kashipur block to the north west of Rayagada and we started the day 2 hours later than planned. 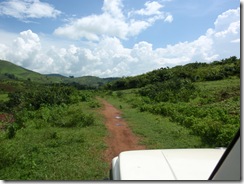 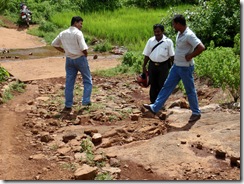 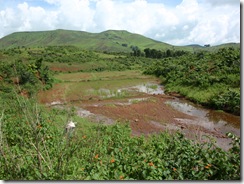 We visited 3 villages, K Marapas, Musatakire and Barangpas, holding open meetings with the villagers, representatives from each of the self help groups we work with in these villages and others who had walked in to attend from even less accessible villages than these. They are accessed only after leaving our 4 x 4 when the driver said no further. Manoj took our guest on by motorcycle and Mr P and I walked onto K Marapas. However, Musatakire cannot even be reached even by motor bike: we had to trek cross country, over fields, along the side of paddy fields and wade thigh deep across a river to get to it. It wasn't far, under 1 hour walk, but typical of the daily conditions for both our field staff and the villagers.
None of these villages has electricity, so the prospect of solar powered light holds high expectations and great change. The lights are supplied by the Teri's Lighting a Billion Lives Project, Shakti's general project fund  is funding part and each village is also raising money for this (an amazing 10% of the total project cost). The project will be done in such a way as to maintain the lights over time, replace their batteries when required, provide a job and small income for a charging station technician from the village. 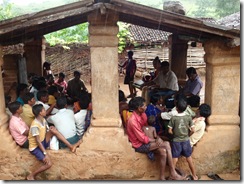 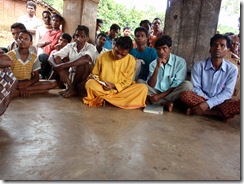 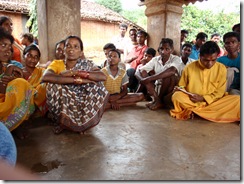 All the meetings were conducted in Oriya and I an pleased to say that I am beginning to hear and recognize more of the words. It was great to witness the villagers discussing the pro and cons of this project, how they would make it work. All ages turned out to hear the  proposal and participate in the discussion - men , women, the young and the old. At various point I heard "Sheila Madam England ru Se VSO karuchi" and more, all accompanied by smiling and nodding of heads in my direction. 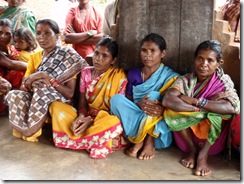 K Marapas was the biggest village of the three and as the village committee decided upon its technician we had an impromptu meeting with the Women's Self Help Groups which Shakti works with in this and other nearby villages. They make and sell leaf plates adding to their household income and with each of their 10-12 members saving 35-50 rupees per month. 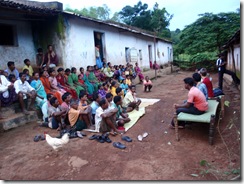 At Musatakire  we took over almost the whole of the main street of the village for our meeting so many people came. After wading across the river I was the first person from our party to arrive in Musatakire behind our guide, the men lagged behind having removed their trousers to cross - me I just waded in! I was  immediately made welcome - helped by a few polite Namastes and Namaskars  and one lady immediately directed me to one house out of which a chair was brought for me to site and rest whilst waiting on the others. I may have been the first European woman to visit these villages I don't know but other than treating me with their usual hospitality it was great to not cause too much of a stir.
It was already dark by the time we left  and headed back across the fields and river 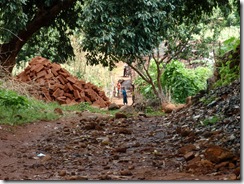 planning to head back to where our 4x4 was waiting, but we got waylaid by the people of Barangpas. They had heard about the project and wanted to participate. We sat out under the trees in the dark and explained the project and answered questions on it. So now instead of having 6 villages participating in this first phase of the project it looks like we will have 7.
We finally got back to Rayagada just before midnight after a long but interesting first day back.
Posted by ashramblings at Wednesday, August 25, 2010
Email This BlogThis! Share to Twitter Share to Facebook Share to Pinterest
Labels: Kasipur, VSO Placement ramble