WARNING!!
This post is not for the faint hearted. Animal lovers be warned!! 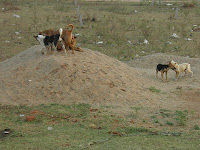 Sometimes you see them lazing around in the heat, all of them seem to love the piles of builders sand which are to be found everywhere with all the building work that is going on. Other times they are nose down sniffing out food or some scent, scurrying over whenever kitchen waste is thrown out: they are part of the local waste disposal system. At other times they can be running in packs, and howling their heads off.  Mostly they look healthy, but that’s because you don’t usually see the unhealthy ones. I recall a bitch who can to rest in a quite spot by H’s stairwell in Koraput last year around this time, we think she had been attacked by a gang of dogs and was in pretty bad shape, bleeding and festering. At home, you’d take it to a vet and get it put down. Here what can you do?
Ex-volunteer AM adopted a street dog in Bhubaneswar as a pup and after vet visits, inoculations and a long flight, JB now has a new home in Canada. Lucky lad!  See JB the wonder dog!
(That was the  nice part!)

REPEAT WARNING!!
This post is not for the faint hearted. Animal lovers be warned!!

About a month back, we had a small pup find its way to my landlady’s house, it was tiny and not eating well and not growing. We have no idea where it came from, but it sort of tried to adopt her house as a safe haven. She started to feed it. But the bigger dogs in the neighbouring houses would steal its food. It clearly had lost its mother very young, been thrown out of the nest so to speak, and had not learnt how to interact with other dogs.  In the morning as I left for work it would always try and follow me, and I’d pick it up and turn it back to the house. Over the weeks it was becoming a little more energetic but still it was small for its age, and it was still whimpering every time we would leave the  house.
By this time it could still get under our gate and so escape the chasing from the neighbours dogs who were now all too big to get through. Then the week before  last it started to follow me to work again. Knowing that my landlady had told me only the day before that she had had to chase the neighbour dogs away to get them of it, I lifted him up and turned him back quite assertively so he wouldn’t follow. I walked off as he slumped back to the house. Just up the lane before the corner I looked back to see him beginning to wonder along the lane again. Next thing I knew there was much growling and squeaking, then screams from the young girl who lives in the house across from us. I was too far away to help. The whole story came to light when I got home in the evening. The 3 big dogs, a mother and two of her pups now grown, had begun to chase the small dog.   She had tried to chase them away, by “nicely throwing stones”, then more seriously throwing stones, but to no avail. The little pup stood no chance. he didn’t know how to play., he didn’t know how to say “I’m no threat, you are pack leader” and their biting took on grave consequences.  The smell of the carcass permeated the whole nagar for some days. The pups tore the small carcass to pieces. The smell brought all the big dogs around,  but interestingly none of them devoured the meat. I saw them approach, nose alert, pups barking, trying to stand their ground, but backing off in the face of the elder dogs. They approached, sniffed the carcass, looked at the pups, yelped, and wondered off. By this point I had my camera out…….