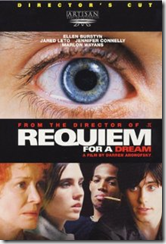 Requiem for a Dream

I felt I needed something more substantial movie wise this weekend. I have long been waiting to watch Requiem for a Dream, having first encountered its director from watching Black Swan which impressed me greatly. Investigating, I found he had directed Ellen Burstyn in two movies and this meant I just had to see more. Burstyn starred in one of my all time favourite movies, the very romantic, personally poignant, Same Time Next Year with Alan Alda. Now at an age when major good parts for mature women actresses are few and far between (the film was made in 2000, she was born in 1932, and is still going strong) , here she was centre stage.

The storyline is simple, drugs ruin lives. Four people spiral out of control as their addictions late hold: the youngsters on smack; the mother ( Burstyn) on quack prescription pharmaceuticals to aid weight loss in the vain hope of becoming a TV quiz show contestant. The opening scene with her son stealing and selling her television sets up the storyline, the culmination of which for all four people is disastrous ……SPOILER, death, incarceration and  prostitution.

The camera tempo for the good times is smooth and normal. For other times it is very jarring, fast and furiously shifting to and fro. There is a juxtaposition of graphical images of drugs flowing through veins, of hallucinations, of the high and the lows, of the energies and the depressions, of the paranoia, of the withdrawal. There is some humour - I’ll never look at a refrigerator in quick the same way again especially when it makes an unexpected noise  :) – but these only serve to show how bad it gets.

This may be a hard film for some people to watch, but this is quite possibly the best anti drugs movie I have ever seen. If I had kids I’d  watch it with them and then discuss. But it is adult in its content, so judge for yourselves first.