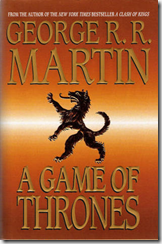 If you like fantasy novels then this is one for you. It may be a long book, but it sped by. I was thoroughly taken by the storyline, the more I read the more I had to read. As with all series some parts will be better than others so I will try and remember this and adhere to my philosophy of reading the whole set and treating it as a whole.

There's a multitude of characters, strewn across the united "Seven Kingdoms" of the land of "Westeros" the book. There's love, honour, sex, faith, betrayal, birth, death, madness, myth, magic and humour as the various house of the kingdoms go to war – you play the Game of Thrones to win else you die and in that way it is reminiscent in parts of the sort of stories found in a Star Trek holodeck with the safety turned off, with even The Khal seeming to remind me of Woolf with his mixture of Klingon fight and his softer sensitive side.

Some of the characters are clearly "baddies", other clearly "goodies", but some, for whom I have a growing liking and admiration, I am at this stage much less sure about - Tyrion the dwarf, Dany the Dragon Princess. Then there is the ever present, mostly unseen threat from beyond the Wall which the 'Men in Black' patrol. Everything you expect from a story made to last.

The book has been filmed for TV by HBO and I think it should suit episodic filming very well. In particular the visually spectacular ending of Book 1 which did not disappoint me at all and hooked me into Book 2. Martin certainly nailed the ending!