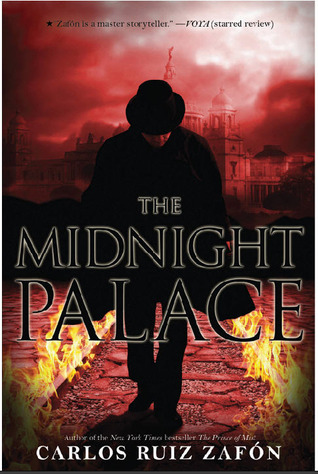 This is the second in Zafón’s Niebla series. Each book stands as a story on its own but the three are linked by the theme of the dark side of a soul tormented.

Set again in the the early part of the 20th century, this time in Calcutta, Zafón masterly creates another highly visual series of fiery transformations for the tormented soul of this story, Jahwal. Oh for someone to make these books into a movie, they are ripe for modern cgi techniques to transform them for a wider audience on screen.

Ben, Siraj, Roshan, Seth, Michael, Ian and Isobel are the Chowbar Society of friends who meet each night in a dilapidated building they affectionately call the Midnight Palace. All residents of an orphanage who on turning 16 will be turned out onto the streets to find their own way in life, dealing with whatever the world throws at them. Their last night together holds revelations, tests their commitment to each other and those of Arayami Bose (such a wonderful grandmother figure) and her granddaughter Sheere through the auspices of the bedevilled Jahwal.

Zafón crafts all his characters well, each of the members of the society are well rounded, well formed individuals, especially when one considers that this series was his first books even though they were translated after the success of the English translation of his later ‘The Cemetery of Forgotten Books’ series. Yes, reviewers and perfectionist have found some inconsistencies in the plot but in my opinion these are minor and don’t detract from the overall effect and impact – that marvellous opening scenes as Lieutenant Peake flees with the new born twins, the wonderful old lady that is Aryami, the gruesome ghostly apparition of the train, and the fiery bloodbath that unravels in the railway station.