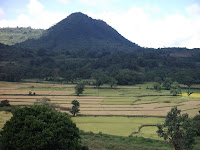 In eastern Andhra Pradesh lies the small village of Araku, nesting in green, lushly vegetated hillsides peaking at all of 2000 feet. This village is on the tourist trail - at least for some of the volunteers in the south of Orissa and for me and my two recent visitors from home. The train journey up from Vizag is beautiful, zigzagging through tunnels and aside waterfalls and giving vistas across the wide open valleys as we steadily climbed upwards.  This was Judith and Catherine's first experience of an Indian train, but for me it was old hat and I even fell asleep for part of the trip in the upper bunk of our First Class(!) compartment.
We'd been trying to book our hotel by telephone for months, having been recommended it by fellow volunteer Margaret but no one seemed to want to answer one phone number and the other rung as unavailable. The AP Tourist Board web site wasn't any more helpful, and so we ended up just turning up. No problem - it was almost empty, I think 1 other Indian family were staying and us.  Clearly not a lot of people come here!
For me the first night was sheer delight - cool and so quiet! No train noise. I slept like the proverbial log, out for the count in two minutes flat. 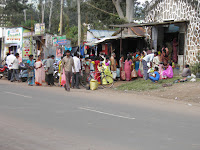 We took a walk round the village: Judith and Catherine's first experience of rural India. I played tour guide :) I was amazed at how much I was able to explain about what was going on and what was happening, and even managed to find out what a long line of women waiting at a shop were doing - Kana hauchi? I asked in Oriya, hoping the Telugu man would understand. Rice jiba came the reply. Yes rice was going! Woman could be seen coming away with large hundredweight bags of rice on their heads. Free, I suspect. 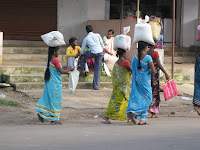 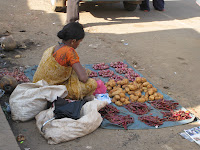 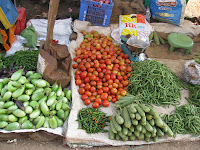 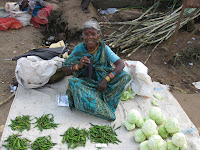 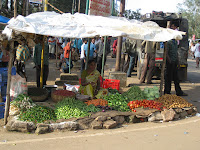 The market was in full swing and ladies were sitting round selling their produce. Piles of tomatoes, potatoes etc neatly laid out in front of them. I explained what some of the more exotic vegetables were and that when a seller did not have scales this was how she indicated how much/how many could be purchased for some amount. Clearly some ladies were better at judging similar sized piles than others. I explained that my NGO works with Women's Self Help Groups on Livelihood projects some of which involved vegetable cultivation projects. But that we also work with the SHG to get them into microfinance - to encourage ladies to purchase weighing scales with a small loan from the SHG. Having a  scale means she has more control how much she gets for her produce.

We slowly sauntered up and down the one street town. We were clearly attracting attention. 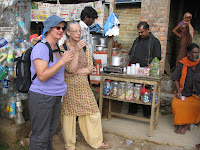 The chai walla smiled and nodded recognition and mouthed a Namaskaram  to me as I stood describing how women here laboured on building sites. I introduced my friends to the delights of chai from him and found out it was his new shop that was being built. But chai isn't everyone tastes - too sweet and milky - so all the more for me :) 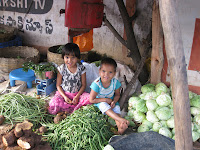 The children on one vegetable stall shouted at us and we went over and chatted away a little to the woman on the next stall, who looked like grandmother but wasn't, took and showed pictures and chatted with mum when she finally appeared. 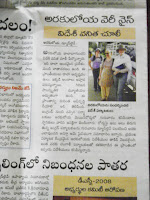 Then as  we walked along the road a man came over taking our picture and saying Local Press I was a bit doubtful but we complied and had our photo taken.  I can sometimes be a bit hesitant taking people's photos, because I do know what it is like to appear to be an object to be photographed with. It happens a lot here, someone comes up and ask to take a picture - not just of you but of you with their whole family, with their wife and children! Anyways the Pressman took our photo and we went on our merry way oblivious to the implications of it until the following day when we visited the Tribal Museum and the lady on the desk showed us the local paper with our photo in it! Celebrities!  And yes the whole village knew about us. Clearly not a lot of European tourists come this way. Later my Telugu speaking colleague translated for us as we wanted to make sure it was appropriate. It was, just advocating tourism in the area and citing us as examples. 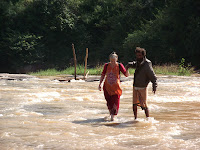 Our tourism trip for the rest of the time at Araku consisted of hiring a driver to take us to the Waterfalls,  The Botanic Gardens and Borra Caves . All these places were definitely worth the visit. 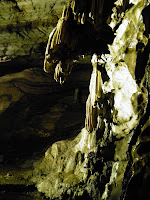 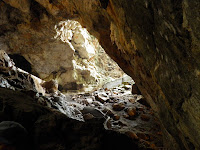 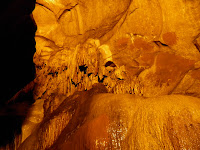 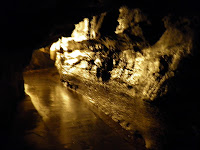 Amazing to find a Botanic Garden in such a small place as Araku. It was well attended, actually had flowers on show, and an amazing amount of butterflies fluttering around - including a fast green and black one about 3inches across,  and some giant spiders, from tip of leg to tip of leg just short of the size of one's palm, hanging in their webs spun across the plant stalks under the trees. 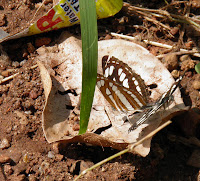 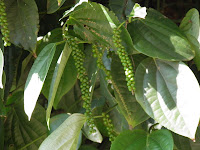 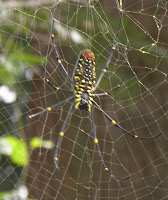 Then it was back to Vizag, this time by car doing the site seeing bits on the way - stop at the local coffee plantation, finding peppercorns growing on the trees - the first time I had ever seen these growing wild!

Just a fun day being a tourist! For me such a nice change.