I wrote before about how local roads were being constructed within our nagar. For those of you who have been to Rayagada,  you will know that the main road through town is not good - more potholes than tarmac, it desperately needs resurfacing. When a local state government official recently visited during the cholera outbreak, many of the potholes were filled in but only with sand, creating a temporarily drivable surface, but one which deteriorated even more with rain and when dry generates a dust bowl. A bit of patch and make do.  Large 10 ton + lorries ply their trade along this route, breaking up the residual tarmac even further and helping the disintegration along at a rapid rate. As one bumped along in an auto, trying not to breath in too much  of the dust and grim they kick up, one wondered when the road would ever be relaid? Then a couple of weeks ago the answer came, work was about to start.
But first a bit of a journey from Visakhapatnam (Vizag) to Rayagada. I've done this  several times now by car, most recently  this weekend with friends visiting from the UK. The main state highway north from Vizag drives through the state of Andrah Pradesh much the same as any road we would be used to back home. You start on the main Kolkata - Chennai Highway, a dual carriageway road, of good construction, which is well maintained. In AP the cars are modern, relatively new, clean, appear well maintained and are numerous.
The main turn off the highway is onto the secondary road to Vizianagaram: still tarmaced, still in relative good condition and state of maintenance. There are still a great many cars, buses, motor bikes, and trucks. As one progresses north the road reduces in size to a single lane in each direction, but it is still basically a good road. Here cows, goats, dogs, and people as well as vehicles are the major road hazards both within the towns and villages along the route. Continuing further north, but still in Andrah Pradesh one reaches Bobbili, where there is a small but growing industrial estate, with some engineering works companies and the like. The road continues to get narrower , loosing some of its finished off appearance, but still maintaining a relatively good surface for much the same type of traffic. In AP most folks are well clad, there are  all the signs of relative prosperity. The villages look rural, but the housing is permanent, of  concrete construction. As you drive along things are getting increasingly rural, more animals are seen and more people are working in agriculture, but still between the villages there is traffic. Motor bike and cars queue up at the various train line crossings, along with a few local people traversing the line. This is the scene until you get to the Orissa state boundary where everything changes.
Literally as you cross the border, the tarmac narrows to a single lane, unfinished at the edges, and full of potholes. Some very deep ones. The lorries remain, as do the  motor cycles, although less numerous than before, but the volume of cars drops away dramatically. Between the villages, more people are walking. The quality of housing deteriorates, fewer concrete buildings, these have now been replaced by wooden framed structures with thatched roofs. The people are noticeably thinner in stature.  Driving is now an exercise in negotiating not just the usual obstacle course of animals, people, and motor bikes but the route begins to wind more, is not so straight, requiring a lot of towing and froing, going left and right, to find a path through a plethora of potholes. These holes can be up to a couple of feet deep so you certainly do not want to go into one in a normal car. The sides of the road are thick mud, the edges of the potholes are unstable, collapsing further as the tarmac and stones turn into rubble. Add monsoon rains, and runoff water into the equation and it becomes treacherous, even in daylight. Thus the road continues from the border to Rayagada town. Factoring in a stop for lunch, train crossings etc the whole journey usually works out  at a 5 hour drive for the 200kms. This last 20 kms takes 1-1.5 hours to drive!
Imagine my surprise therefore on Saturday when we see piles of road construction materials aside the road, and like someone had waved a magic wand, we are suddenly driving on a flat straight road surface,  the switchback of a ride had been transformed into a sleek new road! Of course it didn't last and the bad road reappeared as quickly as it had disappeared.
Now those of you who follow my posts on Facebook will know that a couple of weeks ago we suddenly were faced with the power being cut off for a week. There didn't seem to have been any warning about this until the day of the first all day power outage. This was also the day I first heard the rumours about the relaying of the road. Officials arrived, closed the road into town just at the edge of our nagar, and redirected traffic or turned it about. No one could get into town.  For the next two days local shop keepers could not get goods from warehouses and stores in town, things were running low in the nagar. The power didn't stay off all week and we thought we were lucky until we discovered what was going on. 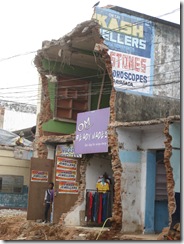 All along the main road into town, through the centre of the market and out onto the Vizag road bulldozers had been at work. They ripped down buildings. All the workshops along our part of the main road, all the shacks selling this, that and the other, all the vehicle mechanics workshops, all the fruit and vegetables stalls under the flyover and by the railway line, all the shops along the market road. I saw a little of it before I left town for a few days vacation with friends over Diwali and only saw the full horror of the destruction on my return. As we approached the town from Vizag instead of seeing the usual hussle and bussle of shop  life, one faces a disaster zone, it is like an earthquake has struck. Whole sides of building have been shaved off here,  half of a building is left standing there, ragged edged brick work frays onto the road, where the other half of the building lies in ruins, reduced to boulders and rubble on the road.
The reason? The government owns the land. The road is supposed to be a certain width. The road has been due for reconstruction, but as always in Indian "when" is the unknown factor and so everyone goes on regardless. Shopkeepers strayed out onto pavements, temporary shacks were erected to house everyone's businesses from mechanics to bag sellers, stalls erected to shelter vegetables sellers as they sat with their wares, everyone had there spot. Now no more. All this has gone, temporary structures, semi permanent ones and permanent ones alike, even the pavement. And the rubble just left lying there.
What amazes me is the resilience that is typical of the spirit of the people here. Life goes on. Businesses carry on. On Sunday, we ventured into the market for  the first time since the destruction. Two  weeks ago I had asked the bag seller to try and get me a camera bag . He expected to see me last weekend, but I didn't make it into market, and my landlady who did go in reported that his shop had disappeared and she didn't know where he was. Today we found him. He has acquired a trolley and tarpaulin, and has set his business back up in the middle of the market road. Clearly he has had more to worry about that getting my camera bag, but was amazingly apologetic for not yet managing to find one for me. We didn't look for the fish seller today, but we did manage to find one of our favourite fruit stalls, but not both our favorite veg stall. 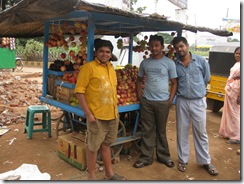 The fruit seller is probably luckier than most in that his stall was a trolley  anyway and so he has just set up again near where he normally was, it is just that there isn't much around about him now.


One of my favorite veg stalls was run by 3 brothers, each with their own part, where they sat under a timber framed roof providing respite from sun and rain. Now all that remains of their stall is a few pieces of broken wood piled in the corner. 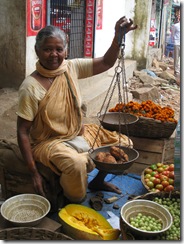 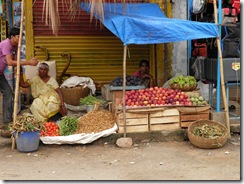 The lady veg seller has faired better, her previous spot has gone, so she has just moved and now sits somewhere else along the market road. 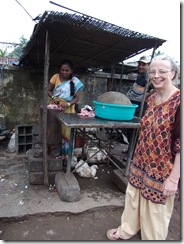 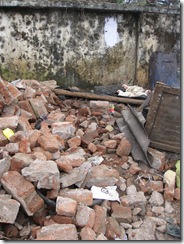 The same is true of my chicken seller, instead of sheltering under his shack, he and his wife have reset up their business in almost exactly the same spot, not 10 feet from where there previous shack lies in ruins. On Sunday she was doing good business as usual and could still manage a smile on her face as a greeting when I went to buy the chicken for our evening meal.


People are gradually finding each other again and shopkeepers are keen to see their trade returning. 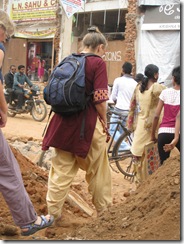 We went to the dress shop to buy local clothes for my visitors, and had to cross the piles of rubble and clamber up carefully positioned stone steps where there previously had been a permanent concrete pavement to get into the shop.  As we walked back along the market road, now reduced to one lane of traffic because of the rubble, a shout rang out and a wave came from the household goods shop I got my pots and cooker from. It was Mr Sahu, the owner,  letting us know he was still open for business. He has lost the whole of the front of his shop, all his signage and entranceway.
OK many of the structures were illegal, they were squatting on government owned land, but was this really the way to do it? Was it really necessary to be so wantonly destructive? Does the road really need to be so wide through the centre of town? Does the concept of a bypass not exist?  What we now have is a bomb site - the remaining buildings and part buildings must be unstable and unsafe. Yet people have to continue to live and work in them.  The dust bowl of the main road is worse than ever, everyone is having to wear scarves when driving to mask their faces in a vane attempt to keep the concrete dust out of their noses and lungs. To me it is incomprehensible and reprehensible what has happened. It is very sad. I know there was outcry when people were moved on and their homes destroyed in Delhi in the lead up to the Commonwealth Games, but here this is the whole heart of the town and a large swathe through it from one side to the other which is affected. Like an open wound, lying unstitched up after a knife attack.  Much as though I have cursed the state of Orissan roads, and Rayagada roads in particular, I would rather they had remained bad than this happen.
A few pictures of the market as was 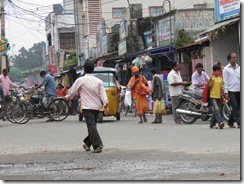 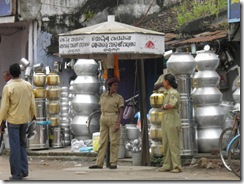 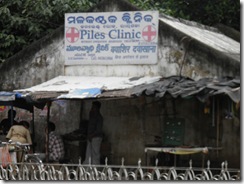 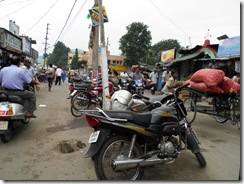 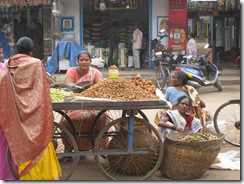 And the market this Sunday morning 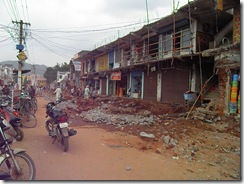 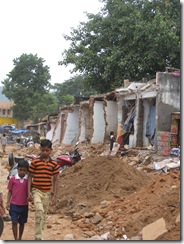 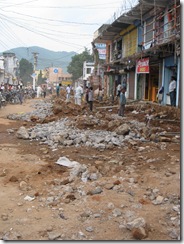 The intrepid bunch of shoppers who weren't going to be deprived of their retail therapy by such conditions were Sushila, Rinky, Judy ,  Catherine, Sheila and driver Govinda. 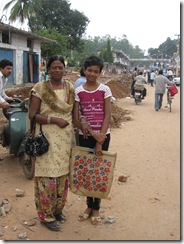 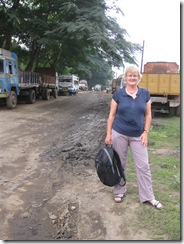 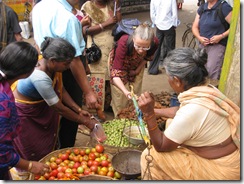 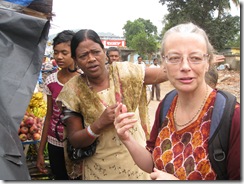 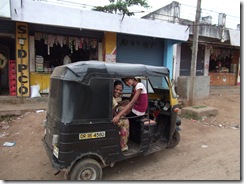 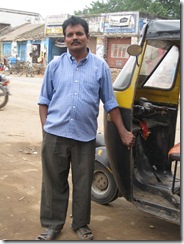 Thanks to Judy and Catherine for some of these pictures, used here with their kind permission.