For many years now Shakti has run a school for child labourers, mainstreaming  250 children from its schools into the formal education system.  Now Shakti is taking its involvement with children and its support of the Rights of a Child one step further. It has become the Rayagada arm of ChildLine India. For 2 days this past week we have been holding first interviews at our Rayagada office for the new Team. 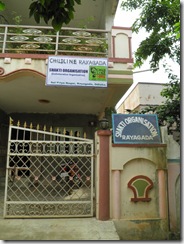 I’ve been patiently waiting publishing this blog post for some time now, knowing Shakti had the role  but the wheels of final government authorisation grind exceedingly slowly. It was several months ago when we were applying for this that S and I headed of to our School to meet with some of its previous students, now attending local schools. They had agreed to stop by their old school on the way home from school to have their story told and their pictures taken to help bring ChildLine to Shakti and to Rayagada . I reproduce 2 typical stories here (names have been changed)


Rinky is  14 years old. She was working in a house maid servant when SHAKTI staff rescued her from her work place. The team counselled her and her parents and after several rounds of motivation, her parents agreed to send her to School . She had previously dropped out at Class 2. Her parents, migrants from Kasipur block, were living in Jhodia Basti (one of the Rayagada Slum areas), and working as construction labourers. Rinky completed her education in Shakti’s Special Child Labour School from 2004 to 2007 after which she was admitted into  Class 6 in RSEWC High School. Then following year she was placed highly (11) in her Class 7 exam and now in 2010- 2011 she is studying in Class 8.
Manoj is 13. He was working in a tea stall when the Shakti team found him in 2004. Again Shakti’s team counselled him and his parents, motivating them to send him to SHAKTI’s School. He had dropped out of formal schooling at Class 3 . His parents are member of the SC communities, work as day labourers and are resident in Sastri Nagar Basti Slum. He too completed his education in Shakti’s Special Child Labour School, Rayagada from 2004 to 2007 and thereafter was admitted in Class 6 in RSEWC High School and is now studying in Class 8. He is very happy with his performance at school and has helped to motivate another 3 child labourers of his slum to also return to education.

These two success stories are typical of the successful interventions by SHAKTI’s staff for the welfare of children.
What, you may ask,  are the issues affecting children in the Rayagada District?

So here’s hoping we can find some good candidates for the ChildLine Rayagada Team! 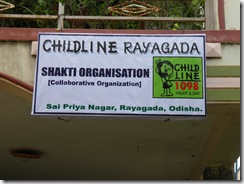