The Blood of Flowers by Anita Amirrezvani 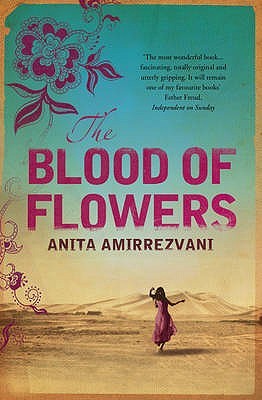 The Blood of Flowers

A young girl and her recently widowed mother, without a male family member to tend their fields, have to leave their home village to seek the protection of her father’s half brother, a carpet maker, in 17th century Isfahan.  He and his wife taken them in, but they are treated like servants.  The aunt is manipulative and resentful of their presence but the uncle recognises the young girl’s talent for carpet design and teaches her because he has no sons to pass his skills and business on to .

Her skills increase and he lends her money to craft her own rug for sale, the sale of which will start to raise money for her dowry. In a moment of frustration with the quality of her work and choices of colours she cuts all the knots, shredding and wasting lots of expensive wool. Without dowry money her marriage prospects are non-existent and she ends up in a secret, although legal, temporary marriage, a sigheh, with the son of a horse trader. Effectively her family have sold her virginity for money on a renewable 3 month contract. She gradually realises just what is really required of her in this arrangement and her contract is extended for a second period securing her and her mother’s wellbeing for a bit longer.

However, she has always been a headstrong child and realising that she is being used by her husband who has no intention of making her a proper lifetime wife, declines the next extension. Retribution by her husband’s new wife and their social circle, the consequences of having kept the sigheh secret from everyone not directly involved,  see strains put on the family’s rug business and without male protection and without money, the girl and her mother find themselves on the street without  money having been tricked out of the payment for her rug by a Dutchman buyer.  Finding shelter with a poor family and with her mother becoming sick, she risks everything in an attempt to keep them alive and to survive.

This a coming-of-age tale which sees the girl, unnamed throughout the book, transform from a headstrong child, doing the rash and impulsive thing without thinking of its consequences, into a bold and determined young woman in charge of her own future. It has all the twisted turns in fortune as seen in the knotted threads of one of the carpets so vividly described in the book – her change in circumstances in her uncle home, the vindictiveness of her aunt, the opulence of her husband’s home, the squalor of loom worker Melaka's one room shack, her insightful relationship with Homa the woman who runs the hamman, her friendship with the neighbour's girl Naheed, how she learns the tricks of how to survive begging from the blind beggar – all these experiences knot together to form the up and down pattern of her life. That life story is interspersed with folk stories, told mainly by her mother, to build up as rich a storyboard as any Persian carpet’s design.

I absolutely flew through this book, loving not only the story the author had put together but also the interspersing Iranian stories. Each of these begins with “First there wasn’t and then there was. Before God, no one was” which in  an Author’s Note to the edition I read is described as a rough translation of the Iranian equivalent of “Once upon a time” expression used at the start of European folk and fairy tales.  Of the seven such tales in the book, two are the author’s own and five are retellings. I was also intrigued to read that the book’s title is taken from a poem called “Ode to a Garden Carpet” by an unknown Sufi poet c 1500 which portrays the garden carpet as a place of refuge that stimulate visions of the divine, whereas within the book the blood of flowers is the dye created from flower petals. This poem is so beautiful I reproduce it here:

Baffled by monotony and mocked by phantoms delirious, Beset by stalking Death in guises manifold; The dreaded jinns, the beasts ferocious, The flaming heat and the exploding storms; Form all these perils here at last set free; In the Garden all find security.

Here the long-laboring Earth at last gives birth. From apparent death, a new and lovely world is born; Below the desert’s dusty floor, the jacinth imprisoned lies. The stony wilderness so bleak and bare, In ageless patience broods, aware of a life within, the promise of fertility and abundance. Ever longing for deliverance. The world at last reveals its destiny.

Can we not then capture and restore The loveliness that gave us hope, Still brightly mirrored on memory’s gliding waters Or snared in the poets’ invisible net, So wide, so fragile, Yet captor and conqueror of realities elusive?

Wrought in gold and azure, bright as carved metal. Dream-like foliage in sparking tones is caught, Or else, in sumptuous shades of glossy lacquer, Quiet but intense; in muffled browns and honey pure, Jasper cool and mellow cinnabar, That fairy land comes real again.

In sudden collisions find sweet embrace; In rhythms enchanting, with stately pace, Or rollicking speed; emerging, retreating, Reversing, in peaceful finality . Their conflicts reconcile, All in confederation blending Like a chorus in part-song gladly singing, In contrapuntal play rejoicing, Floating soft or wildly free; Yet anchored in eternity

ashramblings verdict : 4* This rapid read will ensure that you’ll never look at a Persian carpet the same way again!