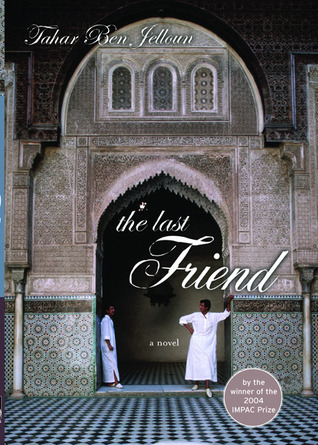 This novel is the story of a friendship between two men – Ali and Mamed. In the first part of the book, Ali recalls their friendship from its beginnings during their childhood, through their studies abroad – Ali in Canada, Mamad in France – , their involvement with the nationalist struggle, their imprisonment and military service, their marriages – Ali to Soraya and Mamed to Ghita -  and their children.  Being told first, the reader is easily lured into all that is Ali’s perspective and like Ali cannot understand the sudden twist in Mamed’s behaviour and the breakdown of the friendship which had survived so much and thrived over the years. From the proceeding Prolog we know Ali has received a letter from Mamed which he says is “ a letter intended to destroy me.”

The second section is told from Mamed’s viewpoint. He recalls different things about their friendship and their experiences, including more details from their imprisonment. He fills in more about his life in Sweden, their relationships with their wives and his illness. He tells about the decision to break off his relationship with Ali, to not see him and how he uses the bills for the refurbishment by Ali and Soraya of his house in Morocco as the breaking point.

The third section is from the point of view of Ramon, a friend of both, but not as close a friend to either as they are to each other. He provides a independent, non-judgemental friendship especially during the period of its dissolution. He provides the background to Mamed and his family’s return to Morocco because Mamed wishes to die on home soil. He also provides an independent view of the sorrow that Ali feels at his friend’s death.

The final section is the letter that Mamed has written during his final months in Morocco explaining why he broke with Ali.  I read it as Mamed’s attempt to explain, to set the record straight, about his destruction of their friendship as an attempt to save Ali the pain of seeing him die. I found it a powerful tale of friendship, of what one friend will do to ease the pain of the other although this act itself hurts him deeply. But clearly Ali did not see it in this way. Just as the two had different memories, so they had different perspectives on the letter. Mamed seeing it as an explanation, Ali as a final blow. Just as memories are idiosyncratic and flawed so can our understanding be of the actions of others. As a reader we’ve not witnessed the events directly only through the participants one renditions. Ben Jalloun’s clever construction of the book means we need to make up our own minds about what actually happened.