Building works, wages and the cost of living 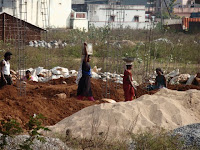 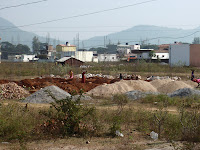 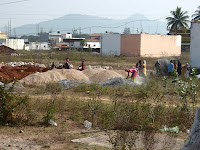 Saipriya Nagar is a developing district at the northern perimeter of Rayagada town. As I've said its roads/tracks/lanes are not even marked on the map yet. Consequently there are several building works going on, inclduing one just across the lane from me. The foundations had been laid when I arrived but nothing seemed to be happening. Then last week it all started in earnest. Workers started arriving at the site and bricks started going up. Building laborouers are men and women here in India, no distinction is made, except some unscrupulous site managers try to pay the women less for the same work, And I mean the same work. Every day I have been passing another house, much later in its build. The same group of women who have been labouring on that site are now working on the other one. They carry amazingly heavy loads on their heads, stacks of bricks, iron piping support struts for the concrete works, anything and everything. Their posture is superb! And they do all this in beaticully coloured, bright, clean, well look after saris or kurta and trousers. They are lithe, very fit, but don't be fooled this is long hard work. They start at around 9  and don't finish until the light goes, currently about 5:30pm. But before 9 they are up, cooked, washed, washed their clothes, ie all the normal everyday chores. In the evening as I walk home I see small fires burning by the older house, where preparation of the evening meal is underway. Each time I pass I always get a series of "namastes"(goodmorning/goodevening), "Tame kipari acha?" (How are you?) Respoding "Bhala achi" (I am fine). We've stopped and chatted but my oriya is not yet understood and they are speaking Telug which I don't understand, but they are clearly interested in  me as I am in them. I think this work may well be part of the NREGS job card scheme in operation in India, except that the same people are clearly employed as a group so it might not be. However, I can't imagine the wages are much different which ever it is. The job card schmeme entitles each household to a certain number of days work per year. The rate for this work is set at  90 rupees per 7 hr day for an unskilled worker, 103 rupes for semi-skilled, 116 rupees for a skilled worker, and 129 for an expert worker.

So what, I hear you ask, does that give someone as a standard of living? What is a typical salary in India? Well that depends on where you are, who you are and what you do. Forget for now the IT hubs of Bangalore, and the city institutions of Mumbai and Delhi, I'm here in a provincial town, bordering rural tribal India. To put things in context,

(1) my VSO alowance is 9000 Rupees per month, which in my case comes in 2 parts 7000 per month paid quarterly in advance direct from VSO, 2000 per month paid in arrears from my NGO, who also fund my accomodation, around 3000 rupees for my 1 bed appartment. Now bear in mind that this is probably a fairly middle class salary equivalent here.

(2) my colleagues in the NGO sector will be on salaries of around 5000 rupees per month for an Economic Development  or Social Work or Political Science graduate with several years experience in the field. If they are working in villages then accomodation is found for them, not their families, but it is basic, probably one or two rooms without any facilities what so ever, no kitchen, no bathroom, no toilet.

(3) A newly qualified doctor last year would have earned 10,000 rupees. Trying to encourage their doctors to stay in India and especially to work in rural practices has seen this rise to 18,000 rupees, but stillthere is a problem at retaining qualified medical personnel.

(4) My door to door sabzi walla (vegetable seller) will probably make about 20 rupees per good day with her working capital tied up in her veg each day, I imagine she has a working float of 100 rupees or so to buy veg each day for resale. Again she goes door to door touting her veg, carrying it in a basket on her head along with her weights and weighing pans. ( I'll add in some pictures once my arm is better and my hand steadier for taking photos out and about).

(5) In the hill villages I visited a couple of weeks ago, the women were spending their free time ie time not spent raising children, doing domestiic duties, cooking, cleaning, tending the domestic animals, working their fields, fetching water etc, to sew leaf plates for sale to local hostelries as plates for food. They get about 30 paises for a plate which takes about 5 minutes to make. That's 3 rupees per 10 plates, about a hour's work

The thing you notice in shops is how small helpings of things are eg Ponds Cold Cream in tiny doll like containers. probably only enough for one or two applications - surely it costs 90% of the price for the container?- shampoo in sachets, enough for one hair wash, like you get in hotel bathrooms; likewise Ketchup in one helping sachets; cigarettes being sold indivually - you get the picture. Most people just do not have lots of cash at any one time.

I got home last night to a lot of activity round the house. My landlady and family were supervising the delivery of an enormous pile of long metal supports. Clearly more building work is planned! It turns out another 2 floors are to be added to their building - my thoughts range from, oh no that means lots of morning noise which will interrupt my much needed sleep, to  so that's where my rent money is going! She tells me the cost is 55,000 rupees: I'm not clear whether this is for the strutts alone, for all the materials, or for the whole project.  Life is clearly on the up for the residents of Saipriya Nagar.
Posted by ashramblings at Monday, January 04, 2010
Email This BlogThis! Share to Twitter Share to Facebook Share to Pinterest
Labels: My life in India, The Indian Experience