Outdoors, in a bit of a lather!

I tried to watch as unobotrusively as I could but completely enthralled looking at a young women with children on the building site opposite my house this morning. The site is inactive for the  days of the Telug holiday and she wasn't one of the normal workers. I don't know where she came from or where she was walking to after she left but for half an hour or so at least she stopped at the half constructed building. I think she would be perhaps in her late twenties. I first noticed her as I stood at my door taking in the morning air, preparing breakfast. She was washing her hair. A typically Indian ladies hair, long, black down to her waist, kept in a twisted plait, often piled and tied in a knot on the top back of the head. She was squatted down lathering up her hair. soap suds everywhere, It was really getting a good wash. Let me tell you, with all the dust, grit, lorry exhausts and general smoke here, hair gets truly filthy! At least wearing it plaited or tied up reduces the exposed surface area and helps keep it a bit cleaner.

What strikes one watching anyone squat here is how elongated the tendons are in the backs of their legs, at the ankles. And their balance. It must be also something to do with their centre of gravity. Take me for instance, when i try to sit like that,  firstly my heels come off the ground as my tendons are not long enough, secondly I wobble, I'm unable to maintain my balance around my centre of gravity in that position, and thirdly partly a question of strength as I can't maintain it of any length of time, minutes maybe but hurs, no way! For me it is just not comfortable. But here it is the position of choice and you see it adopted by young and old like. In the west you'll see very young kids do it, but that's about it.

Anyway back to the woman washing her hair. A great form for an artist to draw, the curve of her back, from neckline, down through spine and round to her buttocks, a smooth and perfect contour. Her spine straight as  a die, it is all that carrying of things on top of the head  that brings about perfect posture. Weren't Victorian ladies schooled on hard upright straight backed wooden chairs and to walk tall with piles of books on their heads? Same but much more weight. What then surprised me was that her back was naked down to the what would on a western women be desccribed as the bra line. Still the hair was being washed. Jug fulls of water were being passed over and rinsed through the tresses, time and time again, perhaps several washes, each rinsed out several times till she was satisfied with the result.


Next she stood up. I thought she was finished but no. Her bucket was refilled from the water that had collected after a days downpour in the one built up parts of the building site foundations. Then she was washing  through a length of material and ringing it out. This was then laid out over then top of the bricks to dry. She then proceeded to wash through some other articles of clothing.

The next thing I noticed was her changing her clothes. The area isn't busy, it is in fact quite open, so she was somewhat in an exposed position, but at the same time a safe one. Slightly embarassedly I watched, she looked around constantly whilst changing, and not just watching her children as she did through all of this, but clearly keeping an eye out for others. How does one get privacy on the streets?  Think how folks are so self conscious about their bodies say when trying to change on the beach at home. The way she took her clean saris round her back, like you would a towel to dry yourself with, then wrap it round her upper body in such a way that the old, now totally wet garment could be unkotted and dscreetly removed was  a wonder to behold, such eleagance, done with such a demour demeanour. Practice over a lifetime giving smooth motion, of stylish, simple, precise movements. I felt somewhat of a voyeur, and couldn't bring myself to take pictures, so I hope my description conveys the beauty and intimacy of this.

At one point the youngest child was of exploring, the mother eye darting over to check she was OK But then she started to climb into the water trough. Immediately the women was up, dashed across and snatched up the child to stop it from falling in and perhaps drowning. 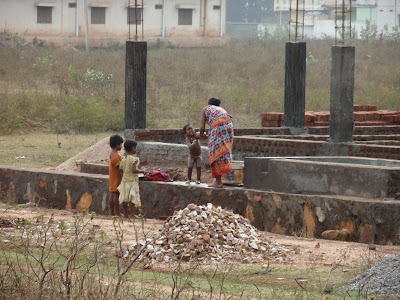 I went back into my kitchen to catch my kettle boiling and when I nexted looked out it was because I started to hear a child crying. Children are the same anywhere. They never like to have their faces washed, especially with a cloth :) Here she was now washing her youngest child, starkers under a mountain of white soap suds being held by the head as the mother's other hand lathered up its face, hair and body. Continued screams equivalent I guess to "Stop, I don't like this". But such care and attention being shown by the women as she made sure every inch of this child was scrubbed clean. Again jugs of water were poured over the little one in portable shower like fashion, to rinse off.  Then a bit of playtime as she splashed the child with handfulls of water, the screams turned to yelps of joy. It should  not be amazing but it is still touching to see a mother's devotion to her kids even under such conditions as this woman was clearly living in.

She continued to rinse through the other clothes, then wash out her pot, jug and bucket. Now when I say a bucket, let me explain. The jug was a small hand sized jug you see evrywhere her, the bowl was metal, like a large cooking pot, cauldron shaped, with a rimmed top edge, but the bucket was the plastic container that say cement, or fetiliser had originally come in, you know the sort of gallon drum type you get from hardware stores. Everything is resused here. Washing finished, she lifetd up her things, one of the older children balancing the bucket on her head, and the family walked off.
Posted by ashramblings at Thursday, January 21, 2010
Email This BlogThis! Share to Twitter Share to Facebook Share to Pinterest
Labels: The Indian Experience