Chivalry is alive and well!

Today has been the hottest this year. Temperatures exceeded my first aid kit thermometer’s capabilities, so is over 43 and meoweather had us at 45C It being a Sunday I’d got up early to do my washing and had everything out drying nicely in the heat, the sabzi walla had been and the fridge was stocked with nice cucumbers for a cold soup, so I had had a satisfying first part to the morning, when I received a call from work. The electrician had arrived, could I please come in. We are about to get a revamp to our computer systems and next weekend will see me and a colleague install our new LAN. So this was the electrician to do the wiring. I said Ok I’ll be there in 20 minutes. Time to grab a shower, get out of house dress, put on some more appropriate attire for the office and walk in. I’m not 5 minutes out of our gate when I get a call, don’t come in he’s only here to check the room layout, he’s coming tomorrow. At the same point in time I have decided that I really should have taken the umbrella as a sunshade, it was 10:30 AM and the temperature was soaring ! I was glad to turn back and head home for another dip under the shower and another change of clothes. 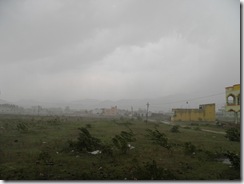 That was this morning. Now it is late afternoon, I’ve had my siesta nap and wondering when there will  be a power cut  and if we shall have any rain. It definitely needs to cool off! I sit down to finalise another blog post when the heavens open, the thunder is unbelievably loud, so much so it physically makes you jump! I unplug my PC just in case. I go to the door and look outside. Can’t see much at all. Inside the power has gone, outside it is grey and teaming down.   Pre monsoon afternoon storm. 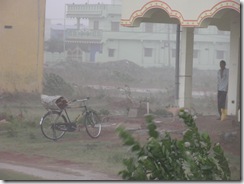 That’s when I see them. At first only him. He is struggling to push his cycle of the lane up under our neighbour’s house’s veranda for shelter. Its loaded with sacks of something and must be pretty heavy anyway never mind now its sodden wet. Finally he gives up on the cycle, and just goes for cover himself.
Next thing I know he’s off running across along the side my house and over to the other lane. Then back he comes with another sack. At first I think he must have been carrying it and put it down to bring the cycle to shelter, but no its bearer now appears, a slight lady, in sari of course, and she is trying to walk over to the veranda too. 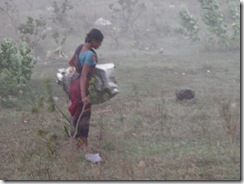 They must have been walking along the other lane when the storm hit (probably either coming back from market or from some rice distribution and collection) their nearest cover being good 3-400 meter dash across the waste ground. No way could she have carried that on her head in this rain. By now the storm was in full swing, she was incapable of even walking against the wind, and was in fact holding on to one of the bushes, conveniently called a “gotcha“ in Oriya! And there she stood for what must have seemed like and eternity.
I couldn’t catch what he shouted or she replied, but then  - drum roll please - he was off again, on another mad dash through the storm to her rescue! And guided her across to their shelter trying to keep her under a makeshift tarpaulin. Chivalry is not dead! What a hero! 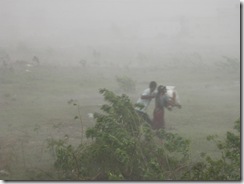 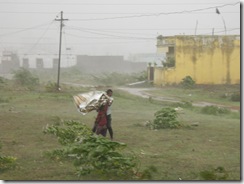 I only caught part of it on camera with poor quality photos and video and from the safety and dry of my doorway…… a day of contrasts, a life of contrasts….but 5*s to the unknown hero!