The Blind Owl by Sadegh Hedayat 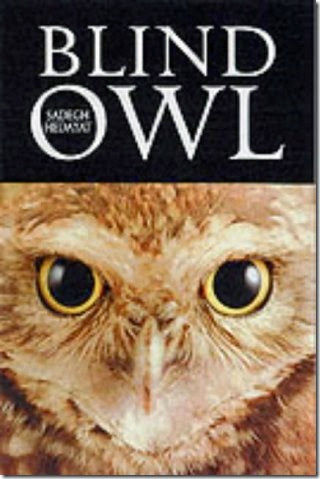 This is one of the strangest books I have ever read. It was banned in the author’s native Iran for many years, caused an increase in suicides post publication, and is one of the most mentioned and most read books in Iranian fiction.

It is a difficult book to rate, not your normal run of the mill or even experimental novel.  It is a ripe candidate for academic analyses from students and doctorate level academicians of literature and Iranian political history. Indeed, academic treatises abound on it, from post colonial to sexual politics analyses. Highly allegorical, the nameless narrator is quite mad, suffering it appears from an unnamed disease which in Persian is called  "Gharbzadegi", " a malaise afflicting Iranian society and the persons influenced by it had lost their roots in society and were compared to particles of dust suspended in the air being in different to religion and to humanity in general”. His narrative wanders back and forth in time, in place, between reality and illusion, between opiate induced dreams and flashback memories, confusing time, place, memory, reality, people, characters, inside and outside of his head, everything. A Kafkaesque melange of senseless, disorienting, often menacing complexity, as a study of madness it probably ranks second to none "Other things which brought their contribution of anxiety and fear were my coughing, which sounded like that of the gaunt black horses in front of the butcher's shop; my spitting, and the fear lest the phlegm should some day reveal a streak of blood, the tepid, salty liquid which rises from the depths of the body, the juices of life, which we must vomit up in the end; and the continuous menace of death, which smashes for ever the fabric of the mind and passes on.”

Not your beach read, not your keep the winter at bay read, but if you want something completely different, exceptionally stimulating, without the need for a beginning, a middle and an end, then this is the book for you, but definitely not recommended for anyone needing a pick me up!

ashramblings verdict 4* on the basis that it is unlike anything you will have ever read, or may ever read.