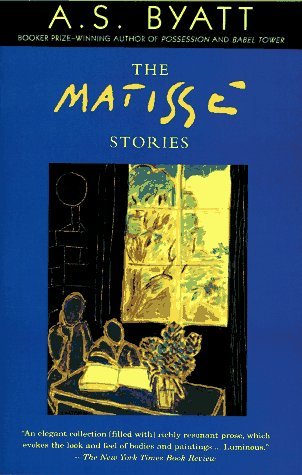 I’ve only read one AS Byatt before The Children’s Book which I had struggled with. This led to my book club buddy recommending this collection and the Djinn in the Nightinggale’s Eye as the best ones to try and I have only now got round to reading more Byatt because my online book club’s short story thread is reading the first story from this collection over the next fortnight.

The collection begins with the story “Medusa’s Ankles” which can also be found online. Middle aged and plump like the Matisse Pink Nude which had originally drew her to this hairdresser’s salon a year or so ago, Susannah is sat in the chair struggling with the continuous inane commentary from the hairdresser about his mixed up love life, his revamp of the design of his salon to jarring techno-black, her own increasing flabbiness and concern with her aging body and dying hair. Her cathartic explosion in the story is dramatic and its ending brings home just how much our own view of our bodies differs from the view of others.

I struggled with reading this story, finding many of Byatt’s sentances jarring and hard work to read. Perhaps this was the author’s intention – to get this reader into the same frustrated state of mind as Susannah – if so it worked and the story in the end made an impact on me such that it encouraged me to hunt out and listen to an audio version of the whole collection (The Matisse Stories unabridged audiobook by Recorded Books read by Virginia Leishman (1997) is available on Scribd). After listening to the story read, I realised this would make an excellent screen play/short film, with a sort of Gok Wan like actor playing Lucien and Anne Reid playing Susannah.

The second story “Art Work”  tells the story of the family life at 28 Alma Road where Debbie a rushed of her feet mother handles her work-at-home artist husband, Robin, her own “breadwinner” work as design editor at a magazine, their children and their housekeeper Mrs Brown. Debbie believes Mrs Brown has become indispensible, making cushions, jumpers in bright colours and goading and baiting “him” by moving thinks around that Robin is sketching causing Debbie to act as peacemaker between her cleaner and her husband. This relationship between Robin and Mrs Brown, comes to a climax over a disagreement on colour.

Then gallery owner Shona McRury comes to see Robin's paintings  which she considers to be about the littleness of life, whereas he thinks they are about the infinite nature of color. Robin sees them as non repetitive series about colour and space, whereas McRury  sees then as increasingly repetive and increasingly boring. Unable to articulate what he is trying to achieve, McRury leaves Robin without the hope of a show. Mrs Brown follows her out of the house and Debbie sees the two engage in conversation but hears nothing, She is left in as much of the dark about the conversation as the reader is until the next scene when Debbie’s magazine is invited to McRury’s gallery.

I suppose the story if about transformation of Mrs Brown and of Robin, but Debbie remains as before the stalwart,m ainstay of the family, holding it all together with the help of a replacement cleaner and Robin and Mrs Bown adjust themselves to the experience.

The third story is entitled “The Chinese Lobster” and can also be found online. Its a story about academic politics and how it handles an accusation of sexual assualt on a student who openly wants a different tutor, one more sympathetic to her viewpoint. Sadly ths story, once again left my totally bemused by Byatt.

Byatt stories for me always seem to evoke an elitist, middle class, London intelligensia, not only in her characters but also in her words, symbolism and references, in this case to various artworks. I suspect this makes her works rather inaccessible to some readers. I remain to be convinced by her writing which always makes me feel I am missing something from her work but which also makes me keep trying.

ashramblings verdict 2*   I continue to struggle with Byatt.