Review: Runaway by Peter May, narrated by Peter Forbes

Runaway by Peter May
My rating: 4 of 5 stars

I was recommended Peter May by a fellow member of my in-person book group and this was my first read of his. I doubled up the paperback with the audio version read by Peter Forbes . For me Forbes does the audio narration very well, he has that vocal tone I find appealing, being in a slightly lower register. He doesn't overdo accents, but he leaves you clearly identfying each character. And in this novel, the characters are well written and come to life off the page. I could hear the Scottish humour in them and they had me recalling the great Scottish comedians like Rikki Fulton.

Runaway is at its core a crime novel, but there's no detective, private eye or the like, instead we have 3 old men each in various stages of decrepitude, plus one overweight nerdish geek grandson, the most unlikely of crimebusters. The men had in their youth run away from their Scottish home to the big city, London, with two others who did not return with them when they came home disillusioned and changed not that long afterwards. What happened during their London escapade now needs to be put to bed as they approach their later years, before it is too late, especially after the newspaper revelations of the recent murder of a wanted man upon his return to England. The story deftly weaves the road trip narratives from present day (circa 2015) and from the mid-1960s as the men make their, often comical, way south once again.

ashramblings verdict 4* I loved it. It is an easy read, but full of marvelous characters and it holds the reader as a thriller should all the way through. A could-not-put-it-down read about having dreams and having them shattered, about friendship surviving the odds of experience, time and place

Audible have a couple of free interviews with Peter May and Peter Forbes (https://www.audible.co.uk/pd/Peter-Ma...) which are worthy of a listen. 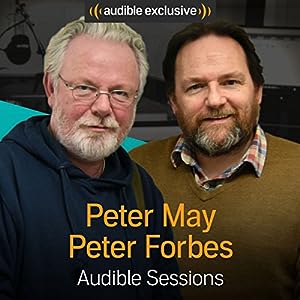