Book Review: The Kingdom of This World by Alejo Carpentier translated by Harriet de Onís 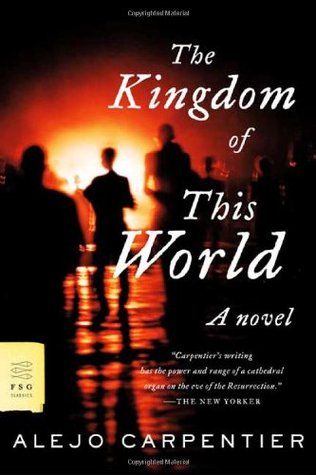 The Kingdom of This World by Alejo Carpentier
My rating: 4 of 5 stars

Very interesting to finally get an opportunity to read this book. There is a new, reportedly better, translation out, but my second hand copy is the one translated by Harriet de Onis.

It is difficult to know where to start, on the one hand this is supposedly a pivotal piece of writing from the early days, if not originator of magical realism, but having read so much Latin American Magical Realism I found it in many ways a bit light. Light with respect to storyline and character, but full of poetic, visual, ethereal, musical and lush passages. It is a short novella and therein is where I think lies the problem, I wanted more detail.

Having said that, Carpentier's writing, in this translation really gets into full flow and is at its best in my opinion in the later part of the book where he really takes senses and makes history coming alive in stunning imagery. Part 3 Chapter IV The Immured is for me where it really takes off when the protagonist Ti Noel re-enters the Cap and finds the "whole city in a death watch" The way Carpentier writes sound as political upheaval is in my opinion brilliant. Likewise in the following chapter V Chronical of August 15 he writes sound as hostility, threat and panic. This continues into the following chapter VI Ultima Ratio Regum which depicts the mutiny against Henri Christophe and his suicide. And it is colour and smells that he uses to write about the building of what will be the "mausoleum to the first king of Haiti" where flesh and blood, turn mortar red. And finally touch as memory and madness as Soliman is confronted with the corpse of his beloved Pauline Bonaparte in Part 4 Chapter 1 The Night of the Statues.

The other thing that came to me when reading this was its use of Voodoo, and of African gods and mythology, which must have been quite novel in any Western Literature at the time this book was written but which today is much more commonplace with the rise of "the African Novel" - only this week BBC 4 TV had a programme entitled Africa Turns the Page: The Novels that shaped a continent> and with the reawakening of the graphic novel genre onto the big screen with the like of "Black Panther" and the rise of Afrofuturism speculative fiction, all of which place African dieties central to their mythology and storytelling.

The final aspect which is worthy of noting, lies in the fact that this is a historical novel, steeped inthe history of Haiti. I only have a broad brush awareness of that countries history but it felt enugh to follow the novel as long as I went with the flow and didn't worry too much about the names which were dropped in, whether they were real of fictional. But I kept remembering reading Gabriel García Márquez's The General in His Labyrinth which is brilliant reimaging of the final days of Simon Bolivar and as a historical fiction Kingdom of this World comes in a distinct second.

So all in all mixed views on the novella, but still worth the afternoon spent reading it.