Aashray Adhikar Abhiyan - providing shelter for the homelss of Delhi

We visited a shelter for the homeless in Delhi on Friday evening - a very humbling and yet inspirational expereince. Please do take some time now to read about their great work 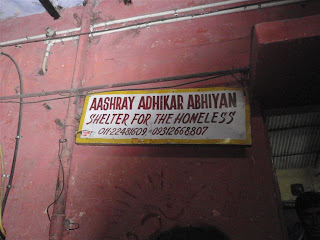 The Aashray Adhikar Abhiyan project has 15 shelters in Delhi , each housing about 1000 people. It is a financed by Action Aid and run by a fantastic set of folk, led by 34 year old Sanjay Kumar, who has spent the last 9 years dedicated to this project - a really inspirational young man with a mission. Many of the staff had been one of Delhi's homeless at one time, others are retired civil servants, others like Sanjay have given up secure lucrative jobs to do this work. They made us feel very welcome, which is hard when you feel a bit of a intruding voyeur.

By way of background, consider that there are some 100,000 people living on the streets of Delhi. They make a living driving rickshaws and working on the numerous building sites springing up around and within Delhi in anticipation of the Commonwealth Games in 2010. Many are migrants from other Indian states where they have been for one reason or another displaced from their familes, homes and livelihoods. These include women and children, many of the children are orphans.Inside the shelters sleeping space is provided, nothing more than your own space on the cold concrete floor, but it is secure, dry, with blankets provided and available for 12 hours in the day for a small fee of 4 rupees for an adult and 2 rupees for an older person. It was amazing to see the respect offered to the elderly men who were allocated their own line of sleeping spaces, everyonelse respecting their age and giving them a sense of pride and respect with no one violating their space. 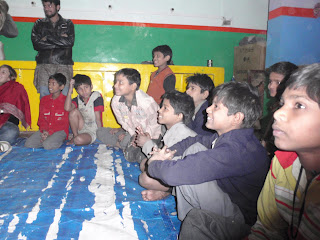 Unfortunately the only shelter catering for women was forced to close last year as the building it occupied was in an area which was being redeveloped. Some children are luckier and we met about a dozen boys, including one pair of brothers, who live at the shelter we visited in Old Delhi. Whilst there they are safe, well fed and looked after by the staff, sent to school so their education is secured as well. They are seen through into jobs,  many going onto jobs within the tourist industry, working in hotels and restauraants. They boys we spoke to were in school grades 3-5 with ages up to 14. They are noticebly small  for their age, but are alert, bright and happy. Sanjay personally is the official legal guardian of 65 children.. They had a great time asking us all in English what our names were and what we did before we came to India. They were incredibly well behaved , laughing and joking as all young boys do but especially they liked our Kenyan colleagues account of being a footbal coach, so a spontaneous lesson in the necesary skills to play a good game had to be given. Evans had them enthralled as he spoke about precision, ball control and the like.

But AAA's work does not stop there. The organisation has managed to persuade the government bureaucracy to issue voters registration cards to the homeless people. This sound a simple achievement but it is all the more amazing as it required the governing bureacry to bend the rules - never an easy thing! Its impact however is tremendous - it has such a powerfully uplifting effect on the people affected by it, giving them a sense of self worth and pride. It is a huge step, meaning a whole gambit of things ranging from an end to intimidation by police to the ability to get an ATM card and secure their money from their work. Let's hope their aim of replacing their lost woman's shelter can come to fruition.