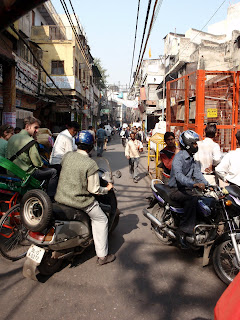 We went for a cycle rickshaw ride through Old Delhi on Saturday. This was my first time in one of these contraptions. Basically, they are a bicycle at the rear of which is a buggy-like seat for two a la the style of a horse and trap. The rickshaw man then peddles away like mad to haul two passengers around. They come in two basic models - one which has a metal frame around your person offering something to hold onto and some semblance of a shell space around the passenger, and the second type which does not have this. The one without the frame seems to be forever slanting forward and balancing on its seat without anything to hold onto is very much an acquired skill. Care must be taken that no part of you extrudes from the area of the buggy seat else you risk injury by passing rickshaws, motor bikes, cars, buses, and between the hours of 10PM and 6AM, lorries.


At first, Delhi traffic appears to be very disorganized, haphazardous, with little or no rules of the road or lane discipline. What I have come to call The Delhi Symphony is continual with horns of all descriptions blaring every few seconds.Now most of the older cars don't have wing mirrors so much of the tooting is to indicate that the approaching vehicle from the rear is about to over/undertake the slower one in front. It seems to work. I've actually come think people are very careful drivers in the circumstances. I've yet to see an accident - a lot of extremely close maneuvering is required by all drivers of all types of vehicles to weave in and out and through the mass of traffic jostling for position on every inch of the roadway. Remember that in addition to all this mechanical mass are people, men, women and children, going about their daily life, shopping, working, walking, crossing roads and generally mingling with the traffic. I think one could adjust to driving here but I wouldn't particularly want to as I suspect that when you returned home you'd probably be considered a quite aggressive driver. 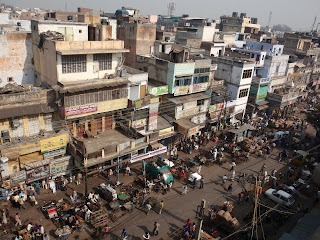 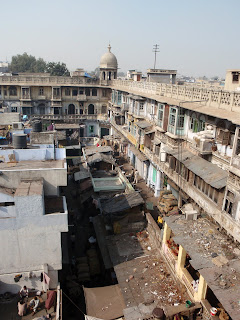 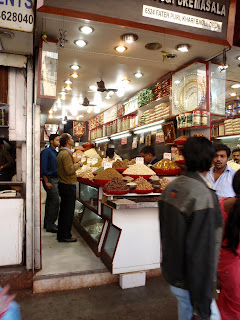 Old Delhi is traversed by Chandni Chowk, an wide street with numerous alleys leading off from it into warrens of shops and bazaars selling all sorts of things.
One of them is the Spice Market. Immediately upon entering the alley you are engulfed in the aromas, in today’s case the primary nasal onslaught was from chilli and cinnamon. The spice dust is in the air and it really hits the back of your throat, resulting in much sneezing, runny noses, and coughing for a few minutes until you acclimatize, then wow you comprehend what you are smelling. After a few more minutes you are well adjusted and loose your sense of smell discrimination. We went up to the roof to see the size of the spice market, essentially a square building with a great many very small stalls from which a vast array of different spices are for sale. I'd have a field day, if I was remaining here in Delhi, walking slowly round these, asking all the vendors what each thing is and how to use it in cooking. I tried a bit of Hindi asking what the name of each was. Sometimes I knew but wanted to know the Hindi word, mostly I could work out what the spice was and although I go the Hindi name this made me none the wiser as to what it actually was. naturally there were many we'd all recognise from Asian stores at home - pepper, cumin, coriander, but others in forms unsual at home such as turmeric root rather than ground turmeric, dried ginger root rather than fresh. I am so looking forward to eventually being able to experiment and cook in my own kitchen in Orissa.

The other place we stopped was to visit a Jain Temple. The Jain religion is quite strict but does permit visitors into their places of worship as long as you adhere to certain rules including no leather, no menstruating women, no cameras, and you do your ablutions before entering, washing your hands and mouth. The inside of the temple was in use with people lighting candles, incense and walking up their deities and wafting incense over them. Upstairs in the temple were an amazing set of painted glass mosaic pictures depicting thee life of their Lord. These were very beautiful, very colourful and the work quite intricate. I wandered of to a corner where I saw a man working and realised he was a painter. He becond me into the alcove to see the work being done. I climbed up the the dome, an area about 10ft x 10 ft with a fluted dome about where another man was seated painting the walls. He told me that he had spent 1 1/2 years painting the dome and expected to spend another 3 years painting the walls. Their paint is made from crushed stones and gold leaf is also used. It is a shame in many ways that no photography is allowed as the craftsmanship was of a very high standard and I would have loved to have posted a picture as my word cannot do it justice. The colours are beautiful clear pure colours and the drawings executed with such artistry I was really impressed by this and their dedication to the work.
Posted by ashramblings at Monday, November 23, 2009
Email This BlogThis! Share to Twitter Share to Facebook Share to Pinterest
Labels: Delhi, Jainism, road conditions, Travel