I went marketing at the weekend with Mrs P and ended up in her parents home. Her mother is just a few years younger than me and remarkably looks still too young to have had Sanghamitra, never mind her younger sister. They have a compartatively larger garden for houses here, and when I said that I had a big garden at home I was promptly shown round. Their garden has great shade, very important here as the temperatures start to rise. They grow tomatoes, beans, various leaves, there's a jackfruit tree, and others I didn't recognise. 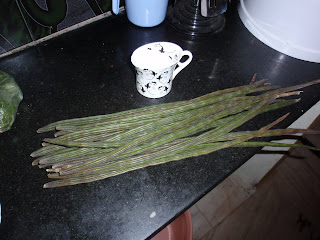 I was presented with freshly picked coriander leaves, scrumptious! and a bunch of drumstick beans. Now I'd seen these bean trees before but had no idea what they would be like to eat. Although they are called a bean they are not a true bean. Botanically they are Moringa oleifera so check out  what they look like.

I was told that the way to cook them was to first peel the skin back, chop them into lengths of about 1-2 in, fry with onions, tomatoes, cumin seeds and chili to your taste.

It is one of the delights of living in another country that you come across strange new foods and of course you just have to try them. Well I did last night! What a disaster! perhaps I didn't follow S's instructions but I won't be buying these. Imagine stringy celery wiithout the juice, and with a bitter taste. Definitely not for me.    After they went out for the cows, it was a quick noodles with a simple tomato and onion sauce with lots of coriander leaves for dinner - much enjoyed.
Posted by ashramblings at Tuesday, February 02, 2010
Email This BlogThis! Share to Twitter Share to Facebook Share to Pinterest
Labels: Food