Lost voice from the Andamans 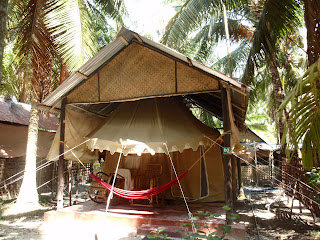 All work and no play makes for a dull life, so Jen and I are followed in the intrepid footsteps of fellow volunteers Suzane, Andy and Cristina and headed for Havelock Island in the Andaman Islands for a weeks R&R.

It is just a shame that it takes so long to get there - I left Rayagada just before 6AM on the Saturday morning to arrive Chennai at 3AM Sunday, then a 2 hour flight leaving Chennai at 9:30AM for Port Blair. There is nothing at all to do at the airport except struggle to keep awake, sleep on the trains is bad enough at the best of times but taking care not to miss a 3AM stop which is not at the end of the route makes sleeping quite difficult! And surprisingly we were 30 minutes early into Chennai - having set my alarm just in case I was woken by my fellow traveller getting his cases ready at 2:20AM, lucky  or what! Jen's flight was late fromKolkata and by the time we hooked up at Port Blair airport enroute to the ferry boat I was shattered, no refreshments on the ferry and I was running out of water. We finally arrived at Vinnies around 4:30PM. 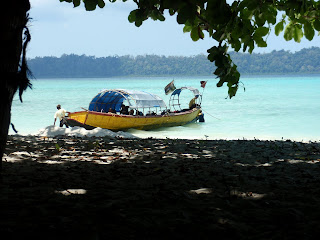 Vinnies is a lovely spot. Right on the beach front, Dive Centre, Full Moon restaurant, nestling under the trees, coconut palms and others, typical tropical island - OK I have seen a few, and some of the best in the world,  but it is still nice to be on one.

To be truthful I didn't do that much whilst there - the name of the game was to get away from the Orissian heat, to eat well and rest up. Quiet nights without train horns, days without washing the house floor to get rid of the soot, seaside breeezes and cooler temperatures of only 34C. 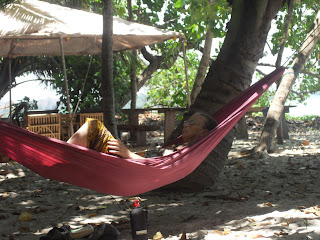 In the market on Havelock I bought a couple of pareos to wear on the beach, being sans swimsuit, and went in the water which was lovely and warm. Having decided that my arm was still not up to hauling me out of the water into a boat, I tried some of shore snorkeling but didn't find any good spots - shame as the dive sites sounds really good. Next time! I spent much of the time strolling on the beaches, lounging in a hammock, reading - shooting the breeze! Should have stayed longer.

Unlike on my Soren Larsen trip to the South Pacific, we didn't really get much of a chance given our short stay  to see the remoter islands. There are still restrictions on tourists visiting some of the Andaman islands and there is a large naval base on the Nicobar which means no travel there. It was the southern part of the island group which was most affected by the 2004 Boxing Day Tsunami, and the earthquake earlier this month was again out at sea but although it was 6.9 it did not have similarly disasterous effects.  I shared my return compartment with a Indian sailor travelling with his two young boys headed for Ranchi, and Varun, a young student, going home to Ranchi after completing his BTEC degree. They were great company on the long train journey. The sailor knew the Andamans well having been stationed there. They told me about the some of effects of the 2004 tsunami and how one Andaman tribe was almost wiped out with only one person left after the wave. In fact recently the last surviving Bo speaker died. So sad to think she had no one to talk to in her later years, and she was younger than I am :( You can hear her singing on this link)
Posted by ashramblings at Thursday, April 29, 2010
Email This BlogThis! Share to Twitter Share to Facebook Share to Pinterest
Labels: Andaman Islands, Language ramble, Travel