blink and the four horseman of an Indian apocalypse 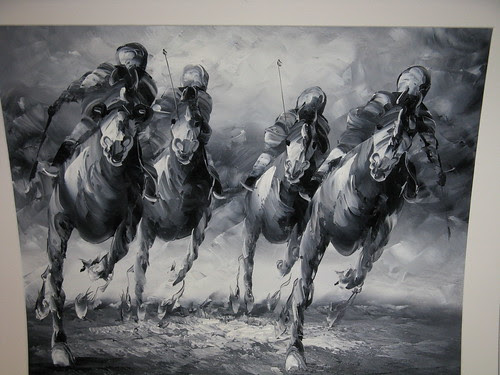 I am reading Malcolm Gladwell’s Blink. There’s one section called “The Importance of Contempt” where he describes work done studying marriage success and failure by John Gottman. Gottman has identified what he calls “The Four Horsemen”: defensiveness, stonewalling, criticism and contempt, of which contempt is the single most important and for which there is no gender difference. He defines contempt as any statement made from a higher level. His research shows that the presence of contempt in a relationship predicts its breakup, and even how many colds the partner receiving  contempt gets. Outside of marriage it correlate with the number of malpractice suits filed against doctors. Please basically do not sue doctors they like. Doctors with a dominant tone of voice are more likely to be sued: doctors who listen and respect the patient are more likely not to be sued.
Another section is called “Primed for Action”, where Gladwell describes the priming experiments of psychologist John Bargh, who showed the power of priming via the  scrambled sentence test – the subject is asked to quickly make grammatical 4 word sentences out of each of the 10 five word group, but the impact is on the subjects behaviour immediately thereafter which is altered through having been primed by the presence of suggestions of say the state of being old in each of the 10 groups of words.
A variant on this, conducted by Claude Steele and Joshua Aronson,  looks at  the implications of asking college students to identify their race on pretest questionnaire. They are then asked to answer 20 questions for a standardised test used for entry into Graduate School in the USA. Their study shows that black American graduate students scores dropped by 50% when the pre test questionnaire asked about their race. “Girls can’t do mathematics” creates a similar stereotyping effect
All this has me thinking about whether contempt can be primed in relationships?
Here in India I have heard so many folks say how authoritarian their bosses are. If I look back at the best bosses I have had, they do have one thing in common, respect. With the good ones I’ve  never felt I was not respected, that my views and opinions were never listened to, that my advice was not taken. With the  good ones, I was given respect by being given a clear scope for my authority and then allowed to get on with my job. With the good ones I never felt I was being talked down to , even when being mentored or coached in a new area. So in this respect, a relationship with a boss is a bit like a relationship with a spouse and Gottman’s Four Horsemen apply: is you are defensive and never raise your head above the parapet you don’t have a healthy relationship with your boss; if he stonewalls your requests for action, resources etc, the relationship is not good, if either party is unconstructively critical of the other, the relationship is soured and if there is contempt in the relationship you’d best find a new job quick!
So back to India. How often do we hear, see the Four Horseman? I put it to you that they are pervasive. Go on test this out and post back. Think about your experiences with bureaucracies and petty officialdom; about those infuriating moments when you realise that you are getting nowhere with your request for action; every time you were stonewalled by a “jobsworth” during your attempts to get your visa extended; every time someone talked down to you as a “foreigner” ( Mike, think the bus man who harangued  you to keep your arm in). Now think also about how many times you have witness the same behaviour being given out by one Indian to another – yes loads of times. Just look at the dominant tone of voice used by petty officials when dealing with the public, and worse if the public is someone who is SC/ST, or between men and women. How often have you seen people only really working when the boss is around, how openly critical of their staff some leader of organisations are, how controlling they are such that nothing can happen without their say, no one will act or take decisions in their absence ; how centralised decision making is ; and how many times have you then heard ‘oh so and so doesn’t know his job’ or similar comments about colleagues. Yes the Four Horsemen (defensiveness, stonewalling, criticism and contempt) are to be found everywhere.
Clearly the caste system exacerbates this but one is constantly struck by how subservient people are even with people who you would think they should think of as equals. I suggest there are behavioural  primers at work as well. Take for example the Namaste gesture  - in its full form it is not only the placing off hands together prayed like in front of the chest but  is also accompanied by a bow of the head; the whole touching your feet thing; always calling the manager ‘sir’; all dressed up as signs of respect but in reality are reinforcing the inherent contempt of the superior – inferior  relationship rather than fostering mutual respect. Likewise, the wholesale taking of bribes, the paying to get jobs etc are all reinforcers of a superior- inferior relationship.
How do you change this? I don’t have any magical answer but unless one is found I suspect India will be loosing some of its shine, and the BRICS countries will be loosing its current  “I” with some other country over taking from India in terms of growth and influence in the world on 2050.
Posted by ashramblings at Monday, August 08, 2011
Email This BlogThis! Share to Twitter Share to Facebook Share to Pinterest
Labels: Book Review, Reading ramble, Reflections, The Indian Experience