Lafia (1) –Escape to the Country 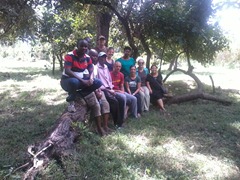 Abuja is a very sanitized volunteer existence. It is after all a capital city and a purpose built one at that. So you don’t get to see much Nigerian life. Also it has all the usual stresses and strains of a city – too much traffic, to high costs, too many expats paying too much for basic things. So it was good to get away albeit only for 3 days.

We headed off to Lafia, in neighbouring Nassarawa State, where one of the VSO volunteers is based with the YMCA who have a farm school there. The journey to Lafia is done in stages: first we walked from our flat to the local market where you catch a bus ( which looks like a bus at home) to the outskirts of Abuja where there are a series of motor parks, each a terminus for long distance buses. These are not really buses but mini-busses, into which some 16 people are crammed and the bus doesn’t leave until it is full. We got an empty one 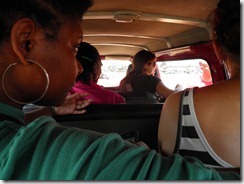 which had the advantage that we could pick where we sat but the disadvantage of having to wait until it filled up in the 35C heat. One of our number really entered into the Nigerian  way and  tried to hassle and haggle with prospective clientele just like the driver! With 3 rows of 3 seats  holding 4 people each and the front seat another 2 plus the driver, we were finally full and the journey had begun. After 3 hours I was glad to get out and be able to stretch my legs.

The farm school about another 40 minutes drive from Lafia where trainee farmers are taught about farming techniques, new crops to diversify their small holding with and increase their income in an attempt to transform subsistence agriculture into an agribusiness. I was particularly interested in this since this is the dream of my previous NGO in India, Shakti Organisation. So a group of 6 volunteers , 4 based in Abuja and 2 temporarily in Abuja but based in Illorin joined other volunteers from Panyam, Akwanga and Lafia to stay for 2 nights up country at the YMCA hostel on their farm. 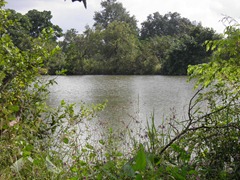 Accommodation was basic, but everyone had a bed (something you cannot take for granted in Nigerian hotels), a mosquito net, and even toilet roll provided. Toilet facilities was simple – squat with bucket and chuck it showering for which you have to collect your water from large bucket containers, which themselves are filled every morning by the staff of the farm who carted it from the on site dam, the only permanent year round water source for a considerable distance.

The farm was built some 30 years ago by a German organisation and has accommodation for up to 40 people and they had commission a company to excavate the dam. but in typical Nigerian style the company ran off with their money. However they did leave a very sizeable excavator on site which is still there. I can’t believe it isn’t worth more, but there it stands getting covered in climbing ground weeds and being overtaken by the jungle. Without the skills or resources to use it the staff of the farm and others dug this dam out by hand, it remains the areas water source to this day and at the right time of year one can catch fish in it.

The staff and trainees were great. Many live on site with their families and they were so welcoming. We paid for the food  but the women cooked our meals – some sort of goat’s meat stew and rice on the first night which wins the best dinner I have had in Nigeria prize,  but then it was back to the ever present egusi soup and pounded yam, to which all I can say is yuck! More another time about Nigerian cuisine but suffice to say I have tried everything and like nothing very much.

For our evening entertainment, we borrowed a projector and screen, paid for fuel for the generator and showed movies which everyone sat round and watched. We started with a children’s movie Alvin and the Chipmunks which had all the kids glued to the screen but I must say the choice went downhill from there with a collection of awful 300N cds of the typical fare of all action crap movies, something about a Preacher assassin and other I forget.

By way of thanks, we bought each of the women a small gift of “Ci” soap, a particular brand requested by the women which is reminiscent of the green bars of Fairy soap that were around when I was very small. We also had some fun times playing with their children, taking photos, trying to speak Hausa, visiting a local village and a weekly village market and actually I think everyone had a fun couple of days.

My fellow volunteers have also blogged about this trip. You can read my flatmate Candace’s account and if you read Dutch you can read Stefan and Miranda’s account 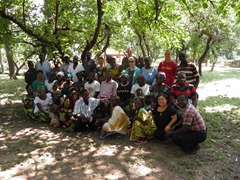