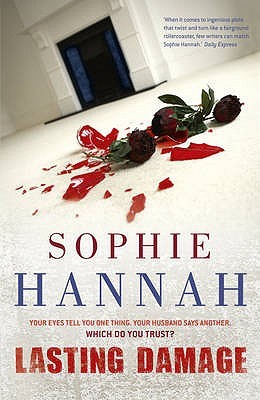 I read this one because I am new to my in person book club and this was what they had decided to read.  I didn’t know anything about the author or even heard of her before.
My first impressions were that it probably wasn’t the sort of book I’d normally pick up: for the first few chapters I thought it was over written, that the author needed a better editor to help condense the text. However, as I read on the plot began to really grasp me and my criticism of the style slipped. I couldn’t work out weather there had been a murder or not, or whether I was reading a murder mystery or a physiological thriller. In the end, for me, the plot worked but the story took too long to tell.
Connie sees a dead woman whist viewing a video tour of a house on a Property web site. By the time she wakes her husband, Kit,  to see it there is no trace of the dead woman and no sign’s or anything untoward in the house. Will anyone believe her? We follow her attempts to get to the bottom of this. The chapters are interspersed with Police Exhibit records, and the book starts with a short chapter indicating that she is going to die because of the Gilpatricks, people she doesn’t know. So as readers we are being conditioned into thinking that there is a death and that perhaps it is her own. One thing I do think is clever is this pre suggestion by the author onto the reader, a technique which she has one of the characters use to great effect in a police interview.
The explanation of the plot comes all at the end, climaxing in a repetition of the opening chapter to complete the loop.  On the front of my copy of the paperback there is a quote from a review written in The Independent ‘Hannah takes domestic scenarios, adds disquieting touches and turns up suspense until you’re checking under the bed for murders’. Do I agree with this? Somewhat. Yes, the domestic scenes in the book provide the root of the story, and to some extent I did feel the suspense as I clearly kept reading the book. I concluded that it would make a better serialised TV thriller – for me there was much more detail of Connie’s family than was required for their part in the story – we have to understand her family ties to buy into Kit’s greater plan – but it is overdone, a TV version could show this much more succinctly without detracting from the dramatic ending.
For me the ending was almost in two parts and I question the need for the final one –  I can see that it is meant to provide the trigger for the behaviour  which plays out in the story, but I can’t help but wonder whether it would have worked just as well without it.
ashramblings verdict 3*: a satisfying thriller in need of a trim.
Posted by ashramblings at Friday, January 10, 2014
Email This BlogThis! Share to Twitter Share to Facebook Share to Pinterest
Labels: Book Review, Halesworth Reading Group, Reading ramble