Jaipur was the first place we visited in Rajasthan.

We stayed at the Devi Niketan, a homestay guest house run by retired naval Admiral Singh, quite a character, whose naval career and family history permeates throughout the guest house, his families home for several generations and where he was born. It was a lovely respite from the city traffic hustle and bustle , with very helpful staff. the Admiral gave me and fellow guest Ailleen from Korea a potted history of the city over breakfast on our first day, supplied maps and instructions on how to get around and what to see. 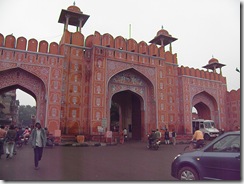 Rajasthan is known for its bright colours and each of its major towns is nicknamed in this manner. Its capital Jaipur is The Pink City and sees a great many tourists being part of the Golden Triangle with Delhi and Agra

It was founded in 1727 by Jai Singh II and at its centre lies the old walled quarter of bazaars and markets all laid out on a grid pattern, so you cannot get lost. We entered through one of its numerous gates, the Ajmerii gate into a crisscross of streets each with their own characteristics, much like an Arabic souk with a section for cloth, another for stone work, another for bangles etc . 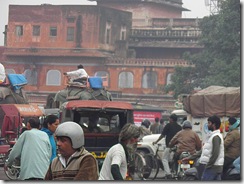 As with all Indian towns there is much happening on the streets, people live and work there, are born and die there. After a year the chaos of it all seems relatively normal. Traffic conditions are the usual mix of people, bicycles, motor bikes, auto rickshaws, cycle rickshaws, trucks, buses and judging by the number of cars people here have more disposable income than in Orissa .  The additional road traffic component in Jaipur is elephants! They are in use at tourists sits to provide rides, but are generally used  as beasts of burden to cart and carry.

The city sights include the City Palace, the Jantar Mantar, a collection of astronomical devices laid out a bit like a Sculpture Park, the Hawa Mahal, a slim, tapering 5 storey building that is only one room wide, and a 30 minute auto ride north a palace and fort at Amber.

The City Palace was our first stop at a tourists site. Armed with my Indian Residency Certificate I left J&C to join the tourist ticket line and headed for the local one. I am pleased to report it worked, and it worked not only here but everywhere! The benefit was much reduced entrance fees. I can’t recall where it was no but on one later occasion I paid 5 Rupees whilst the tourist rate was 100 Rupees – not bad eh?. Occasionally a ticket checker would look quizzingly at me and say “Indian?” and my “Ha”  reply constantly brought huge smiles to their faces. Only on one occasion did the ticket checker phone his superior to check my certificate was acceptable, he’d never seen one before. Generally,  I think it helped being dressed in shalwar kameez and having a few words of Hindi. One thing that did stand out in Rajasthan was the number of times I heard “Nice dress” as I passed. That did me the power of good! When asked where we were from and I said I lived in India there was always a beaming smile of pleasure that someone had come to live in their country. 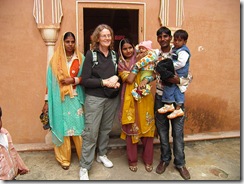 I think it was here we encountered our first of a great many requests to have our pictures taken, mostly by families, and nearly always it seemed that C was the photo opportunity of choice, maybe she looks quintessentially English. This young man with a little English politely asked and then proceeded to say this is my wife and family. He was clearly very proud of them.

As our trip progressed this photo habit got a bit too much at times and we had to draw the line, but a “kafi” was met with respect and withdrawal, no hassle. We always made a point of taking to people when they asked us where we were from, even risking being chatted up in order to sell us something, but folks were genuinely interested. In fact we were approached by two young students in Jaisalmer and got into a very interesting discussion about how Westerners were so rude. The young guys were on holiday from Mumbai and as folks do wanted to chat, but had received several brush offs, one downright rude one. We tried our best to convey that rudeness was rudeness and unacceptable, but that culturally we don’t just stop a stranger in the street and chat, and to explain its use as a sales tactic on us. After chatting for some 10 minutes or so we took our leave with an exchange of names and handshakes, everyone happy. 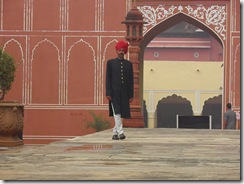 It was in the City Palace that I experienced a Westerner’s rudeness. A tour party was watching the guards turban display.  I stopped too. Next thing I knew this tall middle aged man had come and stood right in front of me, barring my view. I said “Excuse me!” and he turned round and said “You are not with our group” to which I promptly replied “That doesn’t make any difference and anyway it is just rude to stand in front of someone” 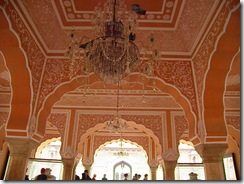 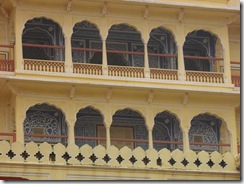 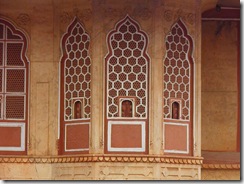 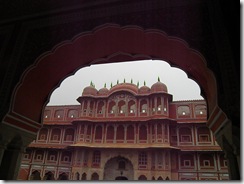 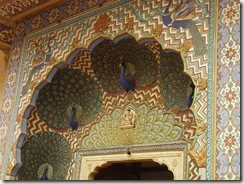 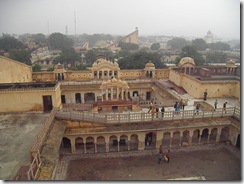 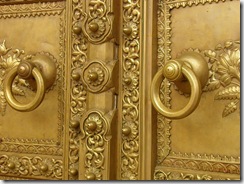 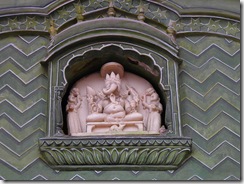 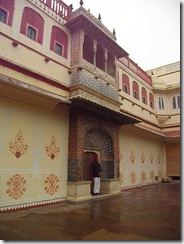 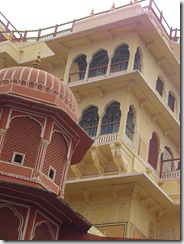 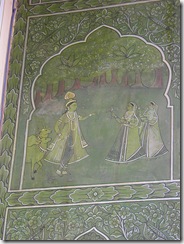 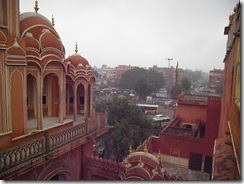