A Fine Balance by Rohinton Mistry 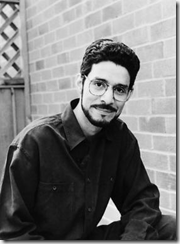 The Author
Rohinton Mistry, born Bombay/Mumbai, now  living in Canada, is one of the many Indian diaspora writers writing in English.  He has authored 5 books –
He does not have a website and does not often give interviews, but as has been reported by Times of India he  has been unusually vocal recently following the banning of his book Such a Long Journey at Mumbai University following allegations by Shiv Sena that the book contained derogatory remarks about Maharashtrians. 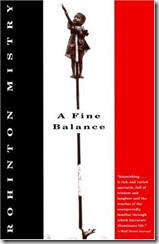 A Fine Balance
During 1975 amidst the  State of Emergency, Farsi widow Dina is trying desperately to avoid her brother’s attempts at making a second marriage for her. In an attempt to earn an independent living she takes in a student lodger, Maneck, and begins a tailoring business, illegally, from her flat with two Hindu tailors, Ishvar and his nephew Omprakash, struggling to make their way in the city. Four lives, brought together by circumstance provide the basis for exploring many of the issues facing India – overcrowding, birth control, urban slums, caste, religion, beggars, homelessness, migration, corruption, and the abuse of power.
The book has won many Literary prizes, including the Commonwealth Writers Prize for Best Book, the Los Angeles Times Book Prize for Fiction and the Giller Prize, and has been shortlisted for many other including the Booker, the International IMPAC Dublin Literary Award and the Irish Times International Fiction Prize.
My Review
Great reviews of this book abound, so I am not going to duplicate. But I will say that as a first world-er living, albeit temporarily in India many years after the Emergency, I can still related to 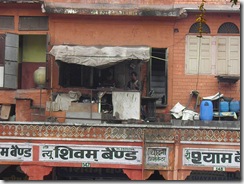 so many of the aspects of this book. The caste system, the religious and political tensions, the corruption - they are all still present in India today, one can still see people sleeping rough, on verandas, in shop doorways, the beggars are still on the streets, but there is something in the Indian spirit of "make do and mend" or "carrying on regardless" which is also still there and gets many people through the day to day tedium of their lives, however they are flung together as the four main characters of this story are. Yet this country has a heart and soul just like the book, against the odds they shine through - contrast the horrors described in this book, the victimisation and brutality of the system and its handymen with the simple happiness of home, of friendships and families, of cooking a meal together. Just as Dina struggles to be her own woman, and to find the fine balance in her relationships with the tailors - employer-employees / friends, so India struggles with its fine balance on the national and international scene.
This book will bring tears to your eyes, sorrow to your hearts and laughter to your voice. It is full to the brim with characters, their stories, their lives, the predicaments they find themselves in. I absolutely loved it.  So where's the film, I ask! The saga style is one I come back to time and time again in my reading: I love their mix of character, place, life stories. This was my first, but certainly not my last, Rohinton Mistry book. Belated maybe, but I think I just discovered India's equivalent to Naguib Mahfouz - both depict their countries so well, with a deft touch of the socio-political, whilst keeping the story grounded in true to life, well formed, characters.
A highly recommended read.
Posted by ashramblings at Friday, December 24, 2010
Email This BlogThis! Share to Twitter Share to Facebook Share to Pinterest
Labels: Book Review, Indian Literature, Language ramble, Reading ramble, Travel