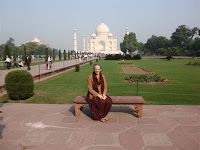 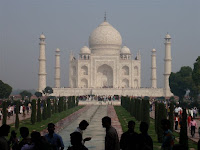 Ok so it is one of the top tourist spots in the world but it is a must see for any born again romantic, so we spent last Staturday visiting the Taj Mahal, now one of UNESCO's World Heritage Sites. 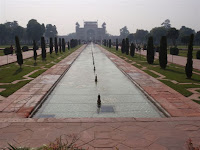 The building is itself quite spectacular, made from white, translucent marble, highky decorated and embossed. It was built as a mausoleum by Shah Jahan in memory of his third and favorite wife Mumtaz. It took some 20 years to build and was completed in 1653. It is a conglomerate mix of styles showing influences of Mughal, Persian and Indian architectures. It certainly reminded me of the buildings I saw in Samarkand and some of the Central Asian mosques

The love story behind it is probably a mix of reality and folklore but it is the stuff of great movies and goes thus: Jahan and Mumtaz met as teenagers within the royal court circles but were unable to marry for 5 years until she was 19. The tale is that she played the role of a merchant with a crystal to tell the future for sale which was actually just a sugar sweet, but using this as an excuse to speak to each other he played along with the ruse and bought the "crystal" for lots of money. In this way they both knew that love was reciprocated. Although Jahan had to marry in the intervening time, by all accounts his heart lay solely with Mumtaz, he did have one other child, but eventually he took Mumtaz as his third wife in a true love match. She bore him 14 children only to die in the final childbirth. He was grieve struck, devastated and decided to build a great place for her to rest. The Taj Mahal is her final resting place.

And then of course there is the now infamous pictture of Lady Diana - that bench is now firmly set on the tourist trail and photo opportunities abound with the inevitable long queues to get just that shot, without any hope of having the VIP treatment to get the place to oneself.

How do you like my new fashionable shalwar kemeez? 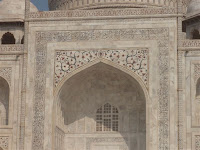 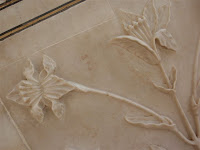 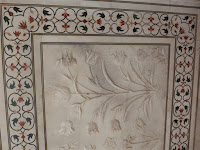 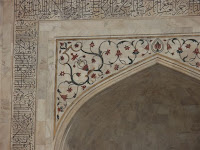 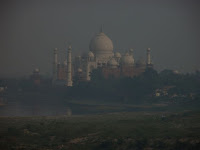 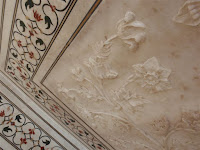 Jahan himself was ousted from power later and spent the last years of his life in the Red Fort at Agra under house arrest. We visited that building as well on our day away from Delhi. The Red Fort is much more of a military looking building, very different in its style and purpose. 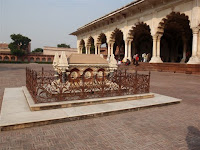 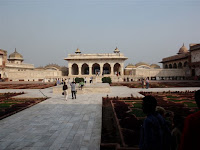 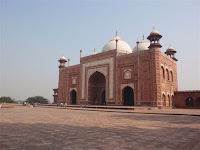 This was our first tourist trip out of Delhi the month we have been here and was a continuation of our experience Indian traffic. We hired cars and drivers for the day - oh so well worth the 10,000 rupees as you will see from the video of parts of our route back. Traffic is hectic, congested in large parts along the 200km route, and comes in a variety of shapes and sizes, speeds and directions, human, animal and mechanical! Enjoy the journey.

The Sights and Sounds of the Agra to Delhi road