The last month has seen addition construction work in our Nagar in that 2nd Lane is being rebuilt. I am told that for 8 years the nagar has been waiting for this.  Only one of the lanes is partially concreted for about 200 yards! The rest are dirt tracks. Everyone's hope is that building the road will remove one of the reasons auto drivers give for not coming out here.
I had been hoping to provide a photo journal of how this was done but I can only provide early and later stage photos as my camera packed in during the middle period, so you will have to use your imagination for part of this tale. 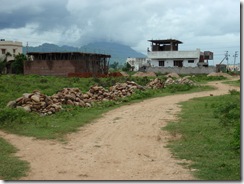 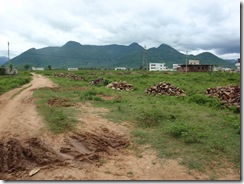 Stage 1. Originally the lane was just a sandy dirt track that you can see in this first photo.
The first signs that something was happening was the arrival  of piles of boulders regularly positioned along the track side.


Stage 2: Place out boulders regularly along the path of the lane. 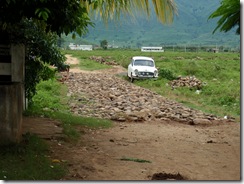 At this stage I am thinking of cobbled streets back home and hoping that this isn't what was going to be the end point here. Cobbles are one thing with their flat surface, but these boulders were just large roundish stones. Un-walkable! And so it remained for some time.

Stage 3: The arrival of gangs of workers, men and women, who flung earth over the boulders. This earth was taken from trenches, 2 feet deep, dug at the sides of the lane. I'm thinking why dig these? They will just fill  with water and become stagnant, and be a breeding ground for mosquitos?  But them where else would you get the soil from the fling on the boulders?
Stage 4: Bulldoze the lot! Yes, seriously! The bulldozer was driven over all the boulders, crushing them to smitherines!
Stage 5: Apply more earth, and repeat.
Stage 6: Wet the resultant surface and leave to bake in the sun. Or if you are unlucky get rained on and go muddy.
The result is in places not at all bad. Cars have been seen driving in third gear! But in other places it has already started to break up where the tyre tracks of motor bikes are creating ruts in the muddy soil where there has not been enough broken boulders. Yes, the secret of a good road surface would appear to be an even distribution of broken boulders. Unevenness leads to ruts. Sadly, we have ruts in one part on my route home. Next rainy season this will be a mucky mess. For the rest its OK.
Until the trenches fill in, folks traversing the nagar, i.e. not following the block pattern of the lanes must take care, especially in the dark, a 2 foot drop is significant! People can be seen jumping across with bicycles in hand, motor bikes kept driving up for the first few days only to have to turn round and find another route - a few Oriyan and Telugu equivalents of Merd were to be heard! 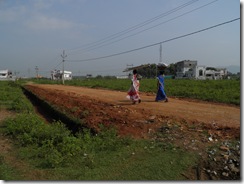 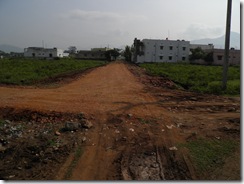 The left hand picture shows one of the first traffic on the new road - two ladies carting firewood back from the forest.
The right hand picture shows the new road surface straight on and left at this crossroads and the old road surface to the right and from where I was standing to take the picture.
Just right click on the pictures to enlarge
Posted by ashramblings at Monday, October 25, 2010
Email This BlogThis! Share to Twitter Share to Facebook Share to Pinterest
Labels: My life in India, Rayagada, road conditions, The Indian Experience