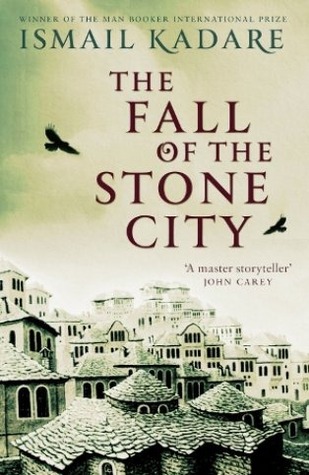 The Fall of the Stone City

This book was shortlisted for the Independent Foreign Fiction Prize in 2013 and Kadare won the International Man Booker Prize in 2005. A prolific author in his home country of Albania, I admit to knowing nothing about him or his work.  The Paris Review has an interview with him in their Art of Fiction series, and James Wood  has written a review  of his work for the New Yorker .

Ismail Kadaré was born in the city of Gjirokaster where this novel begins in the midst of WW2. With the fall of Italy and the advance of the German army the city remains curiously aloof or these worldly matters focussing instead on the rivalry between two doctors – German educated Big Dr Gurameto and Italian educated Little Dr Gurameto. As the German army approaches it is fired on. The Germans advance threatening to blow up the city, but a white flag is seen (or was it a white curtain blowing out through an open window?) and they advance without destruction, instead taking hostages in reprisal. The German commander, Col. Fritz von Schwabe,  traces down his old school friend Big Dr Gurameto and is invited to dinner and the Dr manages to get the hostages released, including Jakoel the Jew. This first part of the novel is told with reference to the traditional honour, pride and culture of Albania with undercurrents, visible every now and then amidst the reunion of old friends, of the violence to come.

The second part of the novel is set in 1944 – 1953, when the Enver Hoxha  regime had taken power and the old values are being replaced by the new. The new power does strange thing – digging unnecessary ditches, renaming streets. The seemingly trivial commissioning new songs and the banning old ones results in the suicide of the culture minister for nostalgic behaviour, Big Dr Gurameto and Little Dr. Gurameto have been jailed multiple times, but always released and reinstated into their medical practices,  then  finally the new state apparatus turns on the establishment fabric of the old city and the epitome of its culture, namely its ladies. I adored the comic irreverence of the story if their downfall – these well bred, delicate, closeted women are killed off by being address as Comrade!  But all these rumbles of change are but a comic interlude before the nightmare really kicks in.

The third part of the novel is set in 1953 at the time of the death of Stalin. The two Drs are prisoners in the Cave of Sanisha prison, a medieval dungeon once used by the Ottomans for torturing prisoners. Big Dr Gurameto is interrogated and tortured, accused of being part of a plot by Jewish doctors to kill world leaders including Stalin. The fateful dinner of the first part of the novel comes back into the doctors plot story and into the interrogation when it materialises that the German commander was not Col. Fritz von Schwabe who had died but an imposter.  First the Albanian inquisitor, than the East German one concluded that Gurameto is telling the truth when he says he knows nothing about the plot. But when finally a Moscow interrogator  arrives, it is truth which is the first casualty. All that is required is a confession. Each time the interrogators’ distorted expectations transform the dinner story into something more, and more grotesque until all that is left at the end is Big Dr’s corpse.

Kadare’s  story is a mixing of history and facts with myth and fairy tales. For example, he uses the old Albanian tale of a dead man who accepts an invitation to dinner, and the one about the rape of Sanisha, the sister of the Ottoman vizier Ali Pasha Tepelena, and his terrible revenge. In the middle of his writing he stops and announces that he, as narrator, is just about to tell us what actually happened, but even then what he starts to say poses more questions than answers (what did happen to Little Dr Gurameto?) . Kadare’s blend of  literary and historical worlds has Kafkaesque moments, humorous moments, and a deft political irony.