Thought you knew who Elizabeth Taylor was? Think again! 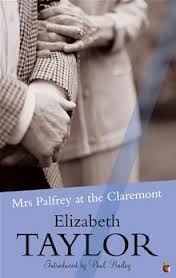 Mrs Palfrey at the Claremont

Not an author I had heard of, although seemingly very respected and well known in her time, and not a book I would normally have picked up  but it was recommended by someone at my in person book group and another person mentioned that they had enjoyed the film version with Joan Plowright . A little bot of research revealed that BBC radio Bookclub had celebrated the author’s centenary in 2012 and David Baddiel had spoken about this book available on iplayer and Jim McNaughtie has written about it on the BookClub blog where he says that Baddiel sees Taylor as “the missing link between Jane Austen and John Updike”, and like Updike Taylor has the ability to "give the mundane its beautiful due”. I can really relate to that from reading this novel. The BBC also covered some of her short stories which sadly have no iplayer links available at the time of writing.

Taylor’s prose is soft, gentle to the point of being gentile, and in places it has a quirky tone in which she encapsulates so much in a moment, for example “Silence, almost, in the dining-room. They lowered themselves into their chairs. As they aged, the women seemed to become more like old men, and Mr Osmond became more like an old woman.” Basically set I suppose in predecimalisation, 70s Kensington, London. Mrs Palfrey, a widow, has moved into The Claremont hotel to live out her lonely retirement. After a fall in the street, she is helped by a young struggling writer, Ludovic, whom she passes of as Desmond, her nephew, to her fellow residents. Ludo, honest but hard up, is happy to go along with the deception in return for dinner and a source of inspiration for his writings on elderly women. You really care about what happens to both of them. Unsurprisingly, “le vrai Desmond” turns up grudgingly on orders from his mother, Mrs Palfrey daughter who lives in Scotland. Tragically, the ending is inevitable as this is a story of the last years of one’s life which the reader can but hope would have been immortalised in the book Ludo is writing and finishes at the tail end of the story “They Weren’t Allowed To  Die There”

ashramblings verdict 3* I can see why Taylor s well regarded but also why she is forgotten – her stories and characters are finely written but come from a bygone era if this one is anything to go by. I am now definitely going to try and get hold of the aforementioned film – I could clearly see Plowright in this role as I read the book.

This is a sweet sad story which makes one hope that the latter years of one’s own life are not so lived whilst at the same time hoping that those who deal with one’s funeral arrangements realise they might not have known everything about your life and your friends.