Kal Bisaki, spitting and running for the hills 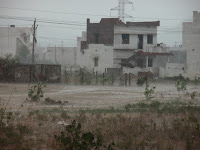 I've commented several times on my facebook page about the winds that pass through here. Often these are in the late afternpoon, and they come after a particularly hot spell. This past week has seen fairly constant 45-47 degrees C temperatures in Rayagada. Even the locals are saying it is hot and feeling the pressure. These winds are quite strong, solid gusts, that raise everything into a real dust bowl, sand and rubbish all go swirling furiously around. I've not been caught out in one and would not want to: I'd be calling for my cheche to keep the dust from my face! I'm told they are characteristic of this period of the year and are call Kal Bisaki. 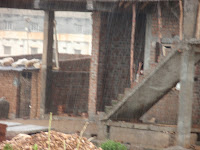 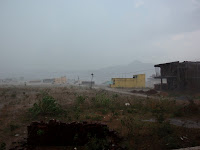 This afternoon's wind was particularly fierce, and I had to go running round the house rapidly closing every window before they blew of their hinges. I'd just opened them to get the evening's cooler air into the oven/sauna that is my house,  In fact the ones I had not hooked open did slam shut. Windows here have metal grills, and the windows open out and are held in place by a horizaontal metal hooks at their base towards the bottom corner of the frame. When shut vertical bolts secure them to the frame at the top and bottom. Fortunately none broke, but unfortunately I have discovered that the prevailing direction of the rain is on the rear wall of my house. There my bathroom has two corner windows which are made of the sloping, open glass type. The rain was jumping inwards off these and clearly if the prevailing direction of the moonsoon is this way I shall have a permanently wet bathroom. Luckily it is a wet room, tiled up to about 4ft high. I quickly move my toilet cleaner, washing poweder etc to the far wall in an attempt to keep them dry. The bigger problem was I was not quick enough at closing the bedroom window which faces the same direction. This has 3 segments to it and by the  time I had secured all three, water was lying on the floor, but more importantly my mosquito net, sheet and matress were wet. 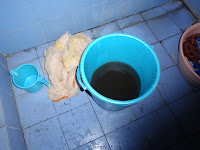 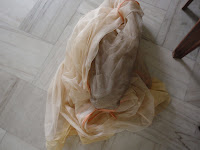 I stripped the bed and left it to dry. The mosquito net was due for a wash anyway so that went in the bucket to soak. I am so lucky to have two nets. I think 2 are a necessity here because the air is so mucky. The reason is the proximity to the train line and the fact that further along the line there is a coal yard, where coal stocks lie are open to the atmosphere. Soot and dust from there along with exhausts from the trains make everything black. Reminiscent of Industrial Britain in the early part of the last century. Even within one day my bathroom has a sooty cover to it. When I am away for the weekend the first thing I have to do when I get back is wash down the bathroom, even before I have a shower, and wash the floor of the whole house. The mosquito nests I have to wash regularly. I have also bought with me an extra can of permethrin to replenish the net which should be done every 6 months. So I thought you might like to see exactly how filthy it was, so here is a picture of the now two tone net and the black water from one soak in water. Yuck!


Which brings up the whole issue of keeping clean in these climes. I know many of you live in either hot climates, or hot and humid climates, but only a few do so without the benefit of air conditioning. I don't know if the rest of you can imagine what it is like if you have never been to the tropics for any length of time or have stayed anything in other than AC hotels. Typically just now I am taking 3-4 showers per day. The up side is that at this time of year the water supply is warm all the time and even hot in the middle of the day. Showers are lovely. Come December and January they are very very cold and believe me one even contemplates less than one shower per day!


The downside is that I am never dry. I am wet all day and all night. My bedclothes are sodden by the morning, my pillow is wet where my neck was. I sweat, the water runs down  my face, my nose, my neck, my chest, all the usual places - use your imagination. During the day sitting on plastic seats just makes you feel like you've become incontinent! And plastic seats are all there usually is. I am so pleased I bought my wooden one with gaps in the back!

I sleep naked wth just a thin pareo as a sheet - partly for modesty in case some peep
ing tom decided to climb the house wall and gawk in through the window and partly because I hate the air movement on my skin produced by the ceiling fan's activity. The fans are on constantly I am in the house. They provide a little respite but only if you are sitting directly under them.

So at the end of the day all your clothes are sodden  - including your underwear. Washing them becomes a daily job: if you leave them they get musty. Again the grim on them has to be seen to be believed. Initially I was hanging these out to dry on our roof, but after visiting Hilary on Koraput and discovering in the clean air of the hills that all my clothes had a sulphurous odur in addition to the tropical mustiness I have started to hang them in the house overnight to dry in an probably fruitless attempt to get them to smell better. 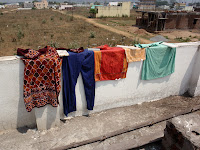 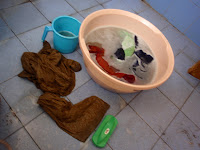 No matter where you are one of life's chores is washing clothes. No washing machine here! Prior to coming to India I had thought it likely that I would get someone to do this for me and so add some money back into the community. Although I drew the line at my underwear :) I don't think my underwired bras would survive the way I see folks thrashing their washing against a stone. Then having found that the nearest washer woman was in Housing Board colony, a nagar across the main trunk route through the town, the idea of washing my own became  more appealing than the walk to and from there and given how few clothes I have here I decided not to risk the unpredictablity of Indian stretch time and the propsect of ending up without any clean clothes to wear. So  I have been washing by hand. I did this for 8 months on the Soren so nothing new here, Ok I have fresh water to wash and rinse with, but it is back to a bucket and scrubbing brush. So my exercise is one of stomping around in the bucket treading clean my garments, in true Roman grape crusher style. Ladies trouser legs are so long, even when they fit correctly (unless, before Jen and others say something, you are an uncharacteristically tall western woman) As a consequence, trouser bottoms get absolutely filthy, as does one's feet so back to hand scrubbing. 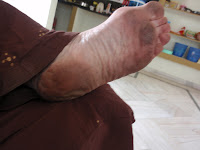 The only shoes I have here are flip flops (that's thongs, for you Aussies and New Zealanders) and most of the time I am barefoot anyway.  You can see the awful colour of the clothes washing water and I draw the line at showing you a picture of the body washing water, just use your imagination and you can imagine why I shower so often.


The pollution in Delhi when we were there in November was bad enough, sulphurous, acidic, corrosive to your lungs and like an acid scrub to your face - I kept telling myself that people pay good money for that in western beauty parlours, and that I was only there for a month and would hopefully never be back. Little did I know what the Rayagada air was going to be like. But it is only soot, not the chemical and exhaust pollutants of the big cities.

But it does make you realise why so many people here are not healthy. Of course there are many contributing reasons, poor diet, hard labourious work, lack of food - Orissa is a famine state, where people die of starvation even today. Many years ago Ghandi visited the Khalahandi district (where i was when I got grounded last week) because of this.


But specifically you see and hear a lot of coughs, and spitting is commonplace for men and women. Given the particulate pollution of the area this is not surprising. Now there is a decidedly Indian way of getting up phelgm from one's chest. It is a bit like a gargle, deep into the chest, which then brings up all the phelgm from the lungswith lots of addedd noise. This is then spat out quite forcibly. The range of people's spits is amazing - yards! I suspect little boys learn this very early on and their usual "how far can you shoot" game may take on an additonal slightly different perspective :)

So I am left today with this insight into the great Indian spitting phenonmenon  and a real understanding of why the women of the Raj headed for them there hills to cool down. Thank goodness I don't wear corsets!
Posted by ashramblings at Tuesday, May 18, 2010
Email This BlogThis! Share to Twitter Share to Facebook Share to Pinterest
Labels: Kal Bisaki, My life in India, weather