I'm sitting peacefully listening to John Crace's Digested Reads podcast  from the Guardian last night when a flash of activity dashes across the floor of my kitchen/sitting room. Oh my, that's a mouse, or is it a rat? Whatever, it is most definitely a rodent. It  has come from the direction  of my kitchen area - not good! Has he been hiding there all the time, how did he get in? Did he come in when the front door was open on these hot steamy evenings, or in an open window?

Clearly why ever it had come to my house for it had not expected to see me sitting there and has scurried for cover amongst my suitcases. Oh no says I, you are not getting in those. I don't know who got the biggest fright - him or me - but next thing I know we are playing tag, dancing around the kitchen: me with the plastic waste bin I use as a veg rack, and him scurrying behind my suitcase, and then  behind a block of marble left over from when the floors were laid, which stands in the corner - good place to hide he thinks.  Yes, I did say a plastic waste bin. I wasn't intending to kill him just to capture and discharge outside. Although I will admit to not having fully worked out how to ensure I wasn't bitten when I tried to get the plate under the upturned wastebin. Don't even begin to think of scenes from a Brave New World!

Anyway back to cat and mouse. At one point I can even see him looking at  me, eyeing me up, Is she going to attack, am I cornered here, how quick is she really?
As I stalk my prey, he tries to wrong foot me, lying in a dummy  move one way then another in an attempt to outwit me and get away. I move the suitcase. One less hiding place. Exposure is the plan. 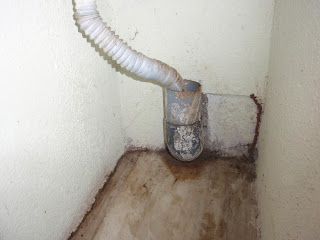 Then just as I'm getting ready to pounce with the basket, he musters his courage and darts straight past me back across the room in the direction he came, I turn round and run after him. In a flash he is gone, but I see where - Where he came from and where he went back to. I'm taken aback! He has jumped into and disappearing down the drain stump.

Now coincidently some days back, or more correctly some nights back, I wake hearing something in my bedroom. I should first explain that in India each room has a drain hole. The custom being to wash the marble floors. So the floors all have a very slight gradient to them, so that the water runs away down the aforementioned drain hole. The one in my bedroom has a metal cover with small drainage holes in it, but this cover is not fixed, it is loose. I never gave it a second thought until the night noise. I got up to investigate to find the cover was off the drain hole and lying slightly to one side. Naturally I replaced it and even went so far as to put a piece of marble over the top to keep it in place. My mind was clearly thinking potential animal entry point.  Right. The little blighters are coming up the drainage outlets.

For now I have slushed the kitchen one with buckets of water and left the tap running for some time. Hopefully this particular rodent is trying to avoid the water lying outside after the recent rains and won't feel like coming up my drain if it too has water flowing through it. However, they do swim so it is not a permenant solution. I wonder if I can find something to cover the stump pipe? Maybe better to think about boxing in the area under the sink? Perhaps a very small sized wire mesh, if it could be fixed securely all the way round.  I suspect he'd nibble through wood. Me thinks I need someone with some tools.
Posted by ashramblings at Monday, May 24, 2010
Email This BlogThis! Share to Twitter Share to Facebook Share to Pinterest
Labels: Book Review, Language ramble, Reading ramble, Travel, Wildlife